The Power of a Single Hail Mary

The Power of a Single Hail Mary* 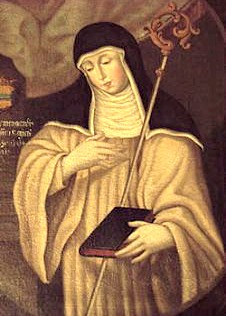 One day, when Saint Mechtilde was praying and trying to think of some way in which she could express her love of the Blessed Mother better than she had done before, she fell into ecstasy.
Our Lady appeared to her with the Angelic Salutation in flaming letters of gold upon her bosom and said to the saint, “My daughter, I want you to know that no one can please me more than by saying the salutation, which the Most Adorable Trinity sent to me and by which He raised me to the dignity of Mother of God.
“By the word Ave, which is the name for Eve, I learned that in His infinite power God had preserved me from all sin and its attendant misery that Eve had been subject to.
“The name Mary, which means ‘lady of light,’ shows that God has filled me with wisdom and light, like a shining star, to light up heaven and Earth.
“The words full of grace remind me that the Holy Spirit has showered so many graces upon me that I am able to give these graces in abundance to those who ask for them through me as Mediatrix.
“When people say The Lord is with thee, they renew the indescribable joy that was mine when the Eternal Word became incarnate in my womb.
“When you say to me blessed art thou among women, I praise Almighty God’s divine mercy, which lifted me to this exalted plane of happiness.
“And at the words blessed is the fruit of thy womb, Jesus, the whole of heaven rejoices with me to see my Son Jesus Christ adored and glorified for having saved mankind.”
*Adapted from Saint Louis de Montfort’s The Secret of the Rosary (Montfort Publications, Bay Shore, N.Y., 1954), 44–45.

Order your free 8x10 picture of Our Lady of Fatima
Posted by America Needs Fatima at 10:13 AM