Margaret was born in Laviano, a little town in Tuscany, to a farmer and his wife. When she was only seven, her mother died and her father remarried a hard and difficult woman, who spared no great love for the free-spirited girl. 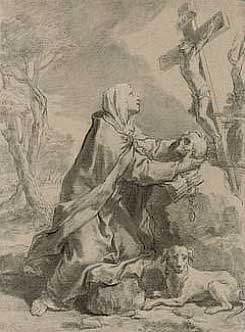 Margaret ran away with a rich young man. For nine years she lived in sin, and during that time bore him a son. Her immoral relationship caused great scandal, and Margaret strove to convince him of marriage, but to no avail. One day, the man took his dog and went riding. When he did not return, Margaret became anxious. After some time, his dog returned and led her to a forest. There Margaret found the broken body of her lover, dead for some days, and took it as a sign from God to amend her life.

Then Margaret traveled to Cortona where she lived a life of prayer and penance near the Franciscan Friars. She devoted herself to caring for the sick, living off of alms, eating and sleeping little, and eventually took the habit of the third order of St. Francis. She sent her son to school in Arezzo, where he later entered the Franciscan Order.

During the twenty-nine years she lived as a penitent, Margaret often spoke with God. A result of her dedication to the sick is the Confraternity of Our Lady of Mercy, which she founded. She died at age fifty, and was proclaimed a saint immediately. The people of Cortona built a church in her honor, where her remains are housed. She was officially canonized in 1728.

Posted by America Needs Fatima at 9:23 AM