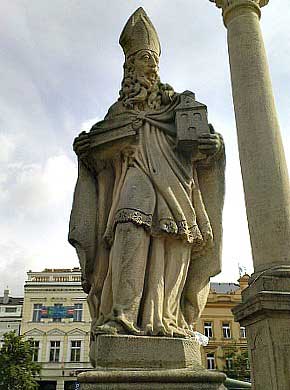 Gothard was born in the Bavarian village of Reichersdorf. Ratmund, his father, worked for the Canons of the neighboring Benedictine Abbey of Nieder-Altaich.

Educated by the Benedictines, the young Bavarian attracted the attention of the bishops of Passau and Regensburg, and the favor of the Archbishop of Salzburg. The latter made the studious youth Provost of the Canons at age nineteen.

When the Benedictine rule was restored in Nieder-Altaich, Gothard, by now a priest, became a monk in the abbey. He went on to become abbot, his installation being honored by the presence of St. Henry, then Duke of Bavaria, and later Emperor, and who greatly esteemed the holy abbot. St. Cunegunde, the wife of the saintly Emperor, embroidered a belt for Gothard, which was long venerated as a relic.

When the see of Hildesheim became vacant, St. Henry nominated Gothard to the post, to which the saint submitted complying with the wishes of his monarch and the support of the clergy.

Despite being already sixty years old, he threw himself into the work of his diocese with the zest and energy of a young man. He restored and built many churches, fostered education, and built a hospice for his beloved sick in the outskirts of Hildesheim.

Though he had a great love for the truly needy, he looked askance at able-bodied professional tramps. He called them “peripatetics” and would not allow them to stay more than two or three days in his hospice.

Posted by America Needs Fatima at 9:54 AM