What is hiding beneath the silk?

Humility Is Compatible with the Rich Dress of One’s Office* 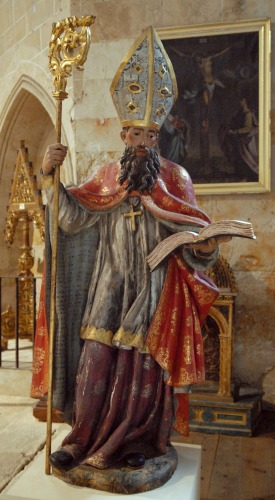 Saint Francis de Sales, the bishop of Geneva, while on a journey during Lent, went to the church attached to a monastery of Capuchin friars.
He arrived at sermon time; the preacher had taken ostentation in dress as his sermon’s theme and was inveighing vehemently against prelates and ecclesiastical dignitaries who, instead of setting an example of humility, wore splendid garments.
When the sermon ended, the bishop went into the sacristy and summoned the preacher. Once they were alone, Saint Francis said, “Reverend Father, your discourse was edifying. It may also be true that we who are in authority in the Church are guilty of sins from which the inmates of the cloister are exempt.
Nevertheless, I consider it highly unwise to say such things as you did on this subject from the pulpit, to the common people. Moreover, I wish to call your attention that for many reasons it is a matter of necessity that the princes of the Church should keep up an appearance befitting their rank. Besides, one never knows what may be hidden beneath a silken robe.”
Saint Francis unbuttoned the upper part of his purple cassock, and let the monk see that he wore a ragged hair shirt next to his skin. “I show you this,” Saint Francis added, “so that you may learn that humility is quite compatible with the rich dress of one’s office. From henceforth see that you are less harsh in your judgments and more prudent in your speech.”
If the dignitaries of the Church were wretchedly dressed, they would lose the respect due to themselves and to their office. Therefore it is not only permissible, but obligatory upon them, to dress in accordance with the official rank they hold.
* Adapted from Father Francis Spirago’s Anecdotes and Examples Illustrating the Catholic Catechism (New York: Benziger Brothers, 1904), 187–188.
Posted by America Needs Fatima at 11:57 AM