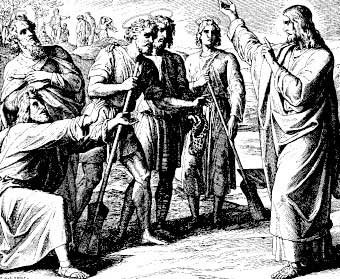 Bartholomew is commonly identified with Nathaniel, whose approach Our Lord greeted with the exclamation: “Behold an Israelite in whom there is no guile.” He was introduced to Jesus by Philip and was the first among the Twelve Apostles to recognize Our Lord for who He truly was: “Rabbi, thou art the Son of God, thou art the King of Israel” (John 1:47-49).

According to the Gospel of Saint John, Bartholomew was from Cana in Galilee and was among the apostles in the boat when Jesus appeared on the shores of the Sea of Tiberius after His resurrection. The apostles had been fishing all night, and had caught nothing for their efforts. An unknown man on shore called for them to cast out the net again, and they obeying Him, caught so many fish that the net was in danger of breaking with the weight of the catch. They soon realized it was Jesus, and He called to them to come into the shore.

Roman legend says the Apostle Bartholomew preached in Mesopotamia, Persia, Egypt, India and Greater Armenia, where he was martyred. According to some, he was flayed alive and crucified upside-down by King Astyages for converting his brother, Polymius. His relics are preserved in the Church of St. Bartholomew on Tiber Island.
Posted by America Needs Fatima at 9:41 AM