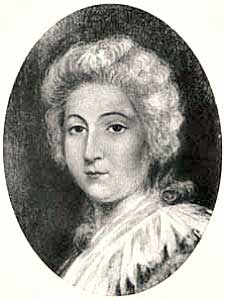 Born at Le Blanc in France in 1773, Elizabeth was the daughter of Antoine Bichier, the Seigneur of Ages and a public official, and Marie Augier de Moussac, whose father was a politician. She spent much of her childhood at the convent at Poitiers.

In 1792, after the death of her father, Elizabeth took her mother to live in La Guimetière. Near their new home was a parish left in chaos because of the French Revolution, and Elizabeth dedicated herself to rebuilding the community. Every night she gathered the parishioners for prayers and hymns. Elizabeth soon became aware of a nearby parish in a similar situation: a priest, André-Hubert Fournet (who later became a saint), offered the Sacrifice of the Mass in a local barn. They quickly became friends, and together they reestablished religion in the area. 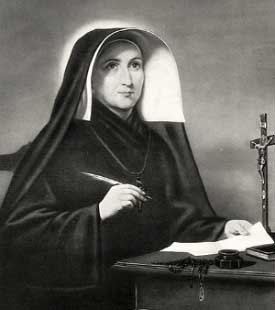 With Fr. André Fournet’s spiritual guidance and assistance, Elizabeth found her true vocation. In 1806, she established a religious congregation of women to care for the sick and aged, for the education of children and to offer reparation for the blasphemies and sacrileges committed against the Most Blessed Sacrament during the French Revolution. The congregation was officially recognized by the diocese in 1816 and named “Daughters of the Cross.”

In 1836, Elizabeth fell seriously ill. After ten days of intense suffering, she died on August 26. She was canonized in 1947. Before she died, she opened over sixty convents under the rule of the Daughters of the Cross.
Posted by America Needs Fatima at 2:11 PM