Nativity of Our Lord Jesus Christ 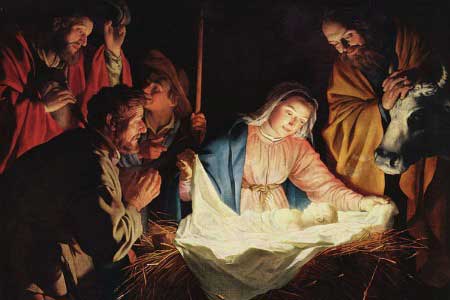 On December 25 the Church celebrates the birth of Our Lord Jesus Christ, the second Person of the Most Holy Trinity made man, Who taking flesh in the womb of the Blessed Virgin Mary through the power of the Holy Spirit, was  born nine months later in a stable in Bethlehem as predicted in the Scriptures: "And Thou, Bethlehem Ephrata, art a little one among the thousands of Juda: out of thee shall he come forth unto me that is to be the ruler in Israel: and his going forth is from the beginning, from the days of eternity" (Micah, 5:2). The Gospels of St. Luke and St. Mathew cover the marvelous story. St. Luke writes of Joseph and Mary traveling to Bethlehem for the census of Caesar Augustus and Jesus being born there and laid in a manger.  He tells of the appearance of an angel to shepherds nearby announcing the birth of the Child as the awaited Savior, Christ the Lord, and how these same shepherds found Him in the humble stable just as the angel had foretold.

In the account of St. Matthew, wise men follow a mysterious star to Bethlehem and lay gifts at the feet of the Divine Child. He also recounts the massacre, ordered by the envious Herod, of all little boys two years old and under, and the flight of the holy family into Egypt to save the Child Jesus. They later settle in Nazareth.

Though there are records of the feast of the Nativity of Jesus being celebrated as early as the third century in Egypt, the celebration of this feast did not spread throughout the Christian world until the middle of the fourth century. It was at first celebrated along with the feast of Epiphany on January 6, the feast of the arrival of the Wise Men or Magi. Little by little, Christmas became its own feast. Many of the early Church Fathers regarded December 25 as the actual date of Christ’s birth.

Historically and traditionally, Christmas is deemed one of the greatest Christian feasts along with the solemn, grateful remembrance of the Lord’s death on Good Friday, and the joyful celebration of His Resurrection on Easter Sunday.

In all Christian countries, Christmas gives rise to a multitude of cultural expressions of colorful, sparkling joy, in remembrance and thanksgiving for this most charming of divine gifts, a God made a babe for our salvation. Countless songs, and ballads through the ages sing of this Gift of gifts, and people, in turn, have recourse to gift giving as a visible overflow of their gratitude and joy – or so it should be.
Posted by America Needs Fatima at 11:00 AM