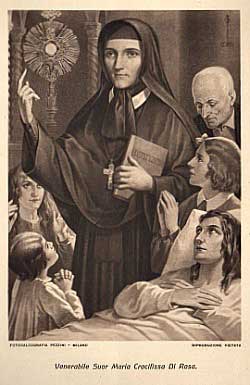 Mother Maria Crocifissa was born Paolina Francesca di Rosa, the sixth of nine children of Clement di Rosa and the Countess Camilla Albani. The di Rosas were a wealthy family of Brescia, Italy.

Losing her mother to a terminal illness at age eleven, her education was entrusted to the Visitation Sisters. At seventeen Paolina left school to assist in the running of her father’s estate and household. To these duties she soon added the care and spiritual welfare of the girls working at her father’s mills and other factories in the city. She also founded a woman’s guild and arranged retreats and special missions. When the cholera epidemic devastated Brescia in 1836, she and a widow, Gabriela Bornati, served the victims in the hospital with such dedication that Paolina was next asked to undertake the supervision of a workhouse for penniless girls, which she did for two years.

She continued to engage in social work, always giving signs of ability and a perspicacious intelligence with a surprising grasp of theology. In 1840, with Gabriela Bornati, she started a congregation with the purpose of serving the ill and suffering in hospitals. Taking the name of Handmaids of Charity, they started with four members and soon grew to number twenty-two.

The name she took upon her profession of religious vows was a synthesis of her whole life: Maria Crocifissa. Her spiritual life was firmly grounded on the imitation of Christ’s suffering on the Cross. This was the foundation of her life, her teaching and her contemplation. Her love for Christ Crucified was reflected in her unstinting and total dedication to the suffering members of his Mystical Body.

As the community expanded, Clemente di Rosa provided a commodious house in Brescia, and their rule of life was provisionally approved by the bishop in 1843. Anticipating Florence Nightingale by several years, the Handmaids of Charity ministered to the wounded in the war which ravaged the region in 1848. After a meeting with Blessed Pope Pius IX in 1850, the constitutions of the Handmaids of Charity of Brescia were approved.

A second cholera epidemic hit northern Italy and pushed the growing order to its limit. After a flurry of foundations in Spalato, Dalmatia and Verona, Mother Maria collapsed, and was brought home to Brescia to die. She passed away peacefully on December 15, 1855 at the age of forty-two.

Posted by America Needs Fatima at 4:55 AM