"You will not allow your holy one to see corruption" - Psalm 16:10
The Catholic Church is full of mystery and miracles; those supernatural occurrences in time that display the power of God for eternity.
Incorruptibility is one of those miracles. And Saint Bernadette (feast day: April 16) is one of the saints chosen by God to show forth His power.
Every Ash Wednesday we hear “You are dust and unto dust you shall return.” Death and decay are a fact of life for us mere mortals; all of us, that is, except for God’s chosen few – the Incorruptibles. These are the saints throughout the history of the Church whose bodies have not decayed over time. Even millennia have passed, as in the case of St. Cecelia, without their bodies turning to dust.
The light of Christ has always shone brightest in times of darkness, and the 20th century was no exception. Certainly a dark time of apostasy and the disintegration of customs, one light that shone brightly was the canonization of Saint Bernadette Soubirous, the visionary of Lourdes, France.

The Life of Saint Bernadette Soubirous (1844-1879)
It could be viewed as ironic that the messenger of Our Lady at Lourdes, a place of healing, should be so burdened by illness throughout her natural life. It seems the miracle of Lourdes was not for her. As a matter of fact, in a vision Our Lady said to Saint Bernadette, “I cannot promise you happiness in this life, only in the next.” 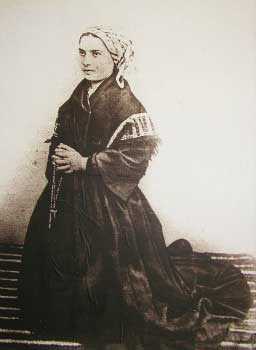 Born into a humble family which little by little fell into extreme poverty, Bernadette had always been a frail child. Quite young, she had already suffered from digestive trouble, then after having just escaped being a victim of the cholera epidemic of 1855, she experienced painful attacks of asthma, and her ill health almost caused her to be cut off forever from the religious life. When asked by Monsignor Forcade to take Bernadette, the Mother Superior of the Sisters of Nevers replied: "Monsignor, she will be a pillar of the infirmary."
She lived in the convent for thirteen years, spending a large portion of this time, as predicted by the Mother Superior, ill in the infirmary. When a fellow nun accused her of being a “lazybones,” Bernadette said, “My job is to be ill.” She was gradually struck by other illnesses as well as asthma: among them, tuberculosis of the lung and a tubercular tumor on her right knee.
On Wednesday, April 16, 1879, her pain got much worse. Shortly after 11:00 a.m. she seemed to be almost suffocating and was carried to an armchair, where she sat with her feet on a footstool in front of a blazing fire. She died at about 3:15 in the afternoon. She was thirty-five.

Doctor Declares: “Not a Natural Phenomenon”
Over the course of the next 46 years, Saint Bernadette’s body was exhumed no less than three times: the first time in 1909, then again in 1919 and finally in 1925. 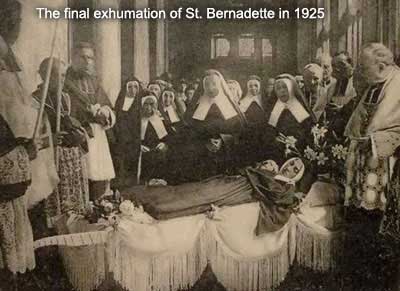 At the first exhumation, it was quickly evident that a miracle had taken place; Saint Bernadette’s skin tone was perfectly natural. The mouth was open slightly and it could be seen that the teeth were still in place. Although the rosary in her hands had decayed, showing rust and corrosion in some spots, the virginal hands that still grasped it were perfect! The sisters present thoroughly washed the body and clothed it in a new habit before placing it in an officially-sealed double casket.
The second exhumation, in 1919, showed no further evidence of decomposition, though her hands and face had become somewhat discolored due to the well-intended washing given by the nuns ten years prior. A worker in wax was commissioned to create a light wax mask of Saint Bernadette’s hands and face. It was feared that, although the body was preserved, the blackish tinge to the face and the sunken eyes and nose would make an unpleasant impression on the public.
That brings us to 1946 and the final disturbing of Saint Bernadette’s resting place. One of the doctors overseeing the final exhumation, Doctor Comte, writes: "From this examination I conclude that the body of the Venerable Bernadette is intact, the skeleton is complete, the muscles have atrophied, but are well preserved; only the skin, which has shriveled, seems to have suffered from the effects of the damp in the 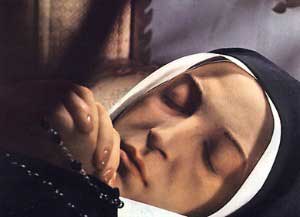 coffin. … the body does not seem to have putrefied, nor has any decomposition of the cadaver set in, although this would be expected and normal after such a long period in a vault hollowed out of the earth."
The doctor was amazed by the state of preservation of the liver: "What struck me during this examination, of course, was …the totally unexpected state of the liver after 46 years. One would have thought that this organ, which is basically soft and inclined to crumble, would have decomposed very rapidly or would have hardened to a chalky consistency. Yet it was soft and almost normal in consistency. I pointed this out to those present, remarking that this did not seem to be a natural phenomenon."

Final Considerations
This is truly the body of Bernadette, lifelike in her attitude of meditation and prayer. 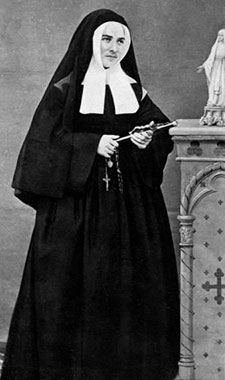 This is the face which was lifted eighteen times to the Lady of Lourdes, the very same hands which fingered her rosary during the apparitions, and the fingers which scratched the earth in obedience to Our Lady’s request and made the miraculous spring appear.
It seems only right that Our Lord would preserve perfectly those ears which heard the message of Lourdes and the lips which repeated “the Lady's” name to Father Peyramale; "I am the Immaculate Conception." This is the heart, too, which bore so much love for Jesus Christ, the Virgin Mary and sinners.
There is a profound understanding in this heart which would one day write, "I was nothing, and of this nothing God made something great. In Holy Communion I am heart to heart with Jesus. How sublime is my destiny."
Yes, how very sublime is the destiny of any Catholic who embraces the call of Christ to be a light shining in the darkness of whatever century he finds himself in. And how sublime the destiny of those who find healing in the arms of she who is “the Immaculate Conception.” 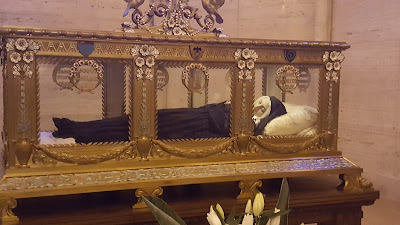