Something Else Sublime Happened on Mount Suribachi

The bitter fighting for control of Iwo Jima in World War II occasioned many heroic deeds. 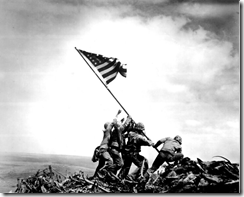 In fact, the United States Marines earned twenty-three Medals of Honor there. However, one of these heroic deeds stands out by its profoundly Catholic bravery.

The Climate Before the Battle and Two Promises
Tension prevailed in the ships as all the Marines felt death might be just hours away. The Marines were up against a formidable foe. Twenty-three thousand Imperial
Japanese Marines, commanded by one of Japan’s most capable generals, occupied hundreds of natural caves commanding perfect views of the landing beaches.

Their heavy weaponry and suicidal tenacity would test the United States Marines’ mettle to the maximum. It was the night before the invasion, and many Marines received the Sacraments from the nineteen Catholic chaplains who were to accompany them to Iwo Jima.

Some Marines visited Father Charles Suver, a Jesuit chaplain, in his cabin to talk and lift their spirits from the tension. At a certain moment, a young officer suggested that if he carried an American flag from one of the landing
craft, someone could raise it on the summit of Iwo Jima’s volcano, Mount Suribachi. 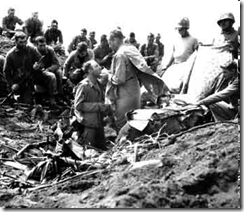 During the invasion, the Japanese contested the Marines’ landing with a hail of mortar shells and small-arms fire that intensified as the landing crafts hit the beaches under Mount Suribachi’s shadow.

Father Suver landed on the most dangerous of all the beaches, Green Beach, which was 500 yards from the heavily fortified Mount Suribachi. Although Father Suver’s life would nearly slip from his hands several times during the battle, he somehow managed to keep hold of it.

In fact, despite the thirty percent casualty rate during the Iwo Jima campaign, all the chaplains managed to survive the battle. When Father Suver and his assistant,
Jim Fisk, reached ashore, they had to find their aid station immediately.

As they searched, unsuccessfully at first, machinegun fire suddenly showered around them, forcing them to fling themselves to the ground. They learned later that they had walked behind Japanese lines and into the territory of five machine gunners.

Another time, Father Suver saw several Japanese bodies lying some distance away. He wanted to examine them to see if they were really dead in order to bury them. The first man was dead, but as Father Suver approached the second, machinegun bullets began sputtering up at his feet.

He immediately ran for the nearest foxhole. Despite these nerve-shattering situations, Father Suver did not
abandon the idea of saying Mass on Mount Suribachi, provided that the American flag was raised there.


The Right Time, the Right Place and the Right Men 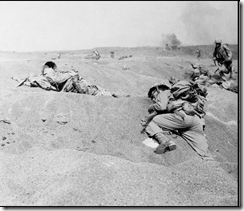 Five days of bloody fighting passed. Father Suver was working at an aid station with Mr. Fisk when he noticed our Marines cautiously scaling Mount Suribachi.  As dangerous as it was, he decided that this was the moment. Summoning Mr. Fisk to grab his Mass kit, they dashed for the volcano.

As they climbed up its side, they suddenly saw Old Glory raised upon the summit. A surge of enthusiasm filled every Marine around—all cheered and some wept for joy as they beheld the American flag flapping in the wind. “All
of us experienced a thrill that none of us will ever be able to describe,” said Father Suver.

Father Suver reached the top and, with the commanding officer’s approval, prepared to celebrate the Holy Sacrifice of the Mass in Latin. Two empty gas drums with a board laid on top were all they could find to serve for an altar.

To shield the priest and the sacred vessels, two Marines held up a poncho against the fierce wind. The Marines protected the priest not only from the wind, but also
from a possible attack. Although the Marines had been able to hoist the flag, nearby caves still harbored Japanese soldiers.

The caves were so close that Father Suver could hear the Japanese in the caves talking as he offered the Mass.  Because of this, the twenty or so Marines attending Mass held their guns at the ready.

Providentially, the Japanese did not attack and Father Suver completed the historic first Mass on all of Iwo Jima.
Father Suver and his men had fulfilled their promise despite the great danger they encountered. Even though the battle would not be over for another twenty nine
grueling days, the flag raising and the Mass encouraged the Marines to keep up the fight in a sublime combination of patriotic bravery and religious fervor.

Indeed, the Battle of Iwo Jima was the Marine Corps’ finest hour.