Dedication of the Basilica of Saint Mary Major

Santa Maria Maggiore or St. Mary Major is the largest church in the world honoring the Virgin Mary and was erected in the immediate aftermath of the Council of Ephesus of 431, which proclaimed Mary Mother of God. 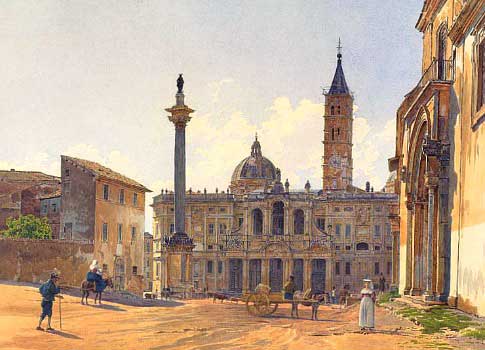 Standing atop one of Rome’s seven hills, the Esquiline, it is also called Santa Maria ad Nives, or "at the snow." It is said that the Mother of God chose this location for a church dedicated in her honor by a miraculous snow that fell upon this spot in summer. Legend has it a rich and pious Roman senator and his wife thought of donating their money and properties to the Church. That night, in August of 358, Our Lady appeared in the dreams of the senator and Pope Liberius asking them to build her a basilica in the exact place where snow would fall that night. Since then, Our Lady has been venerated in Italy as “Our Lady of the Snow.”

The basilica is also home to a few remnants of the humble crib in which Christ was laid at His birth. These pieces of the manger were carried to Rome by Christians fleeing the Muslim conquest of the Holy Land in the 7th century. They are preserved in a silver reliquary resembling an ordinary manger, upon which lies an image of the Infant Jesus. The Holy Crib is the object of particular devotion and veneration during the liturgical ceremonies of Christmas Eve and Midnight Mass. On Christmas morning there is a procession in honor of the Holy Crib of the Infant Jesus, which culminates in the exposition of the sacred relic on the high altar.

Another venerable treasure of Santa Maria Maggiore is the icon of Our Lady under the invocation of  "Salus Populi Romani," literally translated as "health (or salvation) of the Roman people." According to tradition, this image of Mary embracing Jesus as a young boy was the work of the evangelist St. Luke, who painted it on a tabletop made by Our Lord himself in St. Joseph's carpentry shop. This miraculous icon has been carried in processions around Rome on many occasions. In 593 the newly-elected Pope St. Gregory the Great had the icon carried in public procession through the streets of Rome praying for an end to the Black Plague. Pope St. Pius V followed his example in 1571 to pray for victory during the Battle of Lepanto, as did Pope Gregory XVI in 1837 to pray for the end of the cholera epidemic.
Posted by America Needs Fatima at 9:50 AM