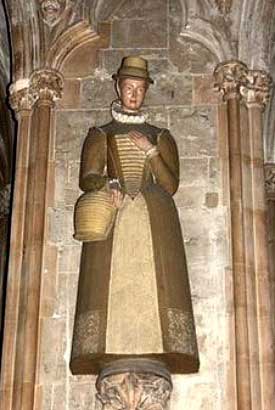 Margaret Ward was born a gentleman's daughter at Congleton in Cheshire, England, and for a time lived as a lady's companion in the house of a lady of distinction named Whitall, then residing in London.

Learning that William Watson, the priest who wrote the work known as the “Quodlibets,” was imprisoned in Bridewell, she became friendly with the jailer's wife and obtained permission to visit him. After several visits she disarmed the vigilance of the jailer and furnished the priest with a rope so he could make his escape. At the appointed time the boatman whom she had engaged to convey Father Watson down the river refused to carry out his part of the plan, and in her distress she confided her difficulty to a young man, John Roche, who agreed to assist her. He provided a boat and exchanged clothes with the fugitive, who made good his escape.

But the clothes betrayed John Roche, and the rope convinced the jailer that Margaret Ward had been instrumental in the flight of the prisoner. They were both arrested and clapped in irons. Margaret was flogged and hung up by the wrists, with only the tips of her toes touching the ground. This torture was prolonged for so long that she was crippled and paralyzed, but her sufferings only served to strengthen her all the more. Still refusing to betray the priest, they were offered their freedom if they would ask the Queen’s pardon and attend a Protestant service, both of which they refused.

Margaret was tried and condemned to death at Newgate. She was hanged at Tyburn in London on August 30, 1588. On the scaffold, she was denied any last words because her persecutors were afraid of the impression her speech would have on the attending crowd.
Posted by America Needs Fatima at 7:33 PM