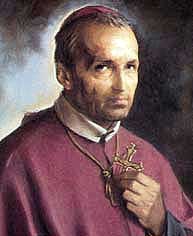 Alphonsus was born in 1696 near Naples, Italy, to a naval officer and his Spanish wife. Educated at the University of Naples, Alphonsus received his doctorate at the age of sixteen. By nineteen he was practicing law, but he decided to give his life to God and left the practice to do apostolate.

On December 21, 1726, Alphonsus was ordained a priest. He spent six years doing apostolate throughout Naples, gathering followers as he went. In 1732, he formed the Congregation of the Most Holy Redeemer, a group comprised of priests and brothers who had dedicated themselves to God and did missionary work in poor areas. By 1749 the congregation became officially approved by Pope Benedict XIV.

In 1762, Alphonsus became bishop of Naples, although he vigorously tried to decline the honor. As bishop he immediately began to reform his diocese. For thirteen years Alphonsus fed the poor, reorganized the seminary and religious houses, taught theology, and wrote extensively. His personal austerities were rigorous, while he daily endured the severe pain from the rheumatism that was beginning to deform his body. He spent several years having to drink from tubes because his head was so bent forward.

In 1780, Alphonsus was tricked into signing a submission for royal approval of his congregation. This submission altered the original rule, and as a result Alphonsus was denied any authority among the Redemptorists. 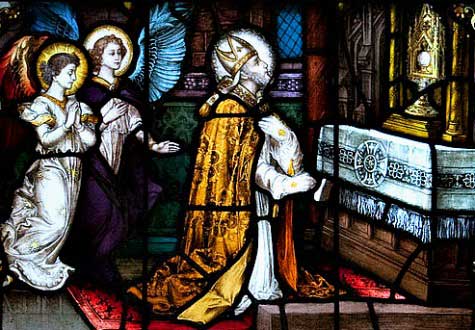 Deposed and excluded from his own congregation, Alphonsus suffered great anguish. He died in 1787 at Nocera di Pagani near Naples.  He was beatified in 1816 and canonized in 1839. In 1871, Alphonsus was declared a Doctor of the Church by Pope Pius IX.
Posted by America Needs Fatima at 12:54 PM