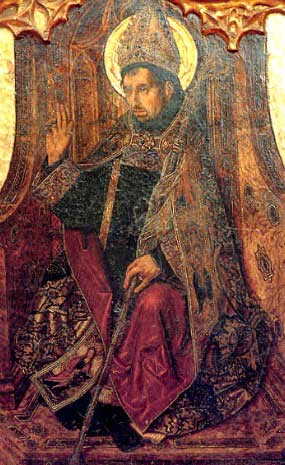 Braulio was a brilliant scholar and a pupil of St. Isidore, who founded a university in Seville, Spain. He eventually became a mentor to his mentor, and went on to advise not only ecclesiasts but kings.

At the death of his brother, Bishop John of Zaragoza, Braulio was nominated as his successor, a dignity he accepted. As bishop, he labored with zeal for his people, and also to extirpate the last vestiges of Arianism, still festering among them despite the conversion of King Recaredo.

He took part in the Council of Toledo, and was charged by the same council to write a response to Pope Honorius I who had accused the Spanish bishops of pastoral negligence. His defense was both dignified and convincing.

The good bishop spent many a night in prayer in the Church of Our Lady of the Pilar, which houses a miraculous statue delivered to St. James, the first apostle of Spain, by Our Lady herself.

He abhorred luxuries of all kinds, wore a hair shirt beneath the vestments of his office, and led a simple, austere life. An ardent preacher and a keen apologist, Braulio's deep sincerity was as convincing as his clear arguments. His generosity to the poor was only matched by the care he took of his flock.

Towards the end of his life he was afflicted by the loss of his sight, a heavy cross for anyone but especially burdensome to a scholar. As death approached, he gave up his spirit to his Lord while reciting the Psalms.
Posted by America Needs Fatima at 10:01 AM