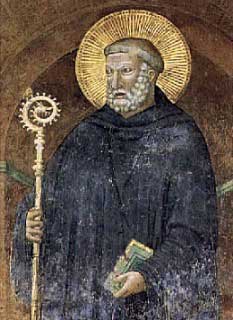 Guy was born near Ravenna in northern Italy to parents who took great pride in him. Primarily to give them pleasure, he was meticulous in his dress and personal appearance. Still, one day during a festival, realizing the vanity of this way of being, and taken with deep compunction, he stripped himself of his fine garments and gave them all away to the poor.

To his parents’ further mortification, their son donned shabby garments and departed for Rome, where he received the tonsure.

On his return, he placed himself under the direction of a hermit named Martin, who lived alone on a small island in the River Po. After three years of directing Guy, the hermit sent him to the Abbey of Pomposa to learn the ways of monastic life.

There Guy so advanced in virtue that he quickly rose to high office, and was elected abbot. Such was his reputation and so many flocked to the abbey that he was obliged to build another. Even his father and his brother joined the monastery.

At certain times of the year Abbot Guy would retire into solitude a few miles from his monastery and there would submit his body to severe austerities. Particularly during the forty days of Lent the austerities were such as to resemble tortures, and yet, he was extraordinarily tender toward his monks who were devoted to him.

Guy did not escape the persecution which often comes to those seeking holiness. For unknown reasons, the Archbishop of Ravenna had developed a hatred for the holy abbot and determined to destroy his monasteries. When Guy learned of the imminent attack, he fasted for three days, joined in this mortification by the entire community of monks. When the archbishop arrived with his soldiers, he was met by Guy with such humility and respect, that he was overwhelmed and asked the abbot's pardon.

Towards the close of his life Guy again withdrew to his solitary hermitage. The Emperor Henry III, who had come to Italy to consult with the holy abbot, summoned him to Piacenza. Though he was unwilling to do so, the aged abbot obeyed, taking a tender farewell from his brothers whom he said he would see no more. Attacked by a sudden illness in Borgo San Donnino near Parma, he died three days later.

Both Parma and Pomposa claimed his relics, but the emperor settled the dispute by having his body translated to the Church of St. John the Evangelist at Speyer in Germany.
Posted by America Needs Fatima at 8:48 PM