Katharine Drexel was born Catherine Marie Drexel on November 26, 1858, the second daughter of Francis Anthony Drexel, a wealthy banker, and his wife, Hannah, who died very shortly after Catherine’s birth. Francis married again two years later, and he and his new wife, Emma, had another daughter when Catherine was five. 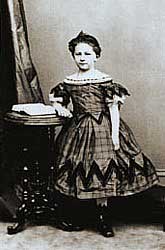 The three Drexel children were well educated and enjoyed many social and material privileges. They were privately educated at home by their tutors and would often tour parts of the United States and Europe with their parents. They were brought up to the practice of the virtues and assisted their parents every week when they opened their home to the care and aid of the poor.

Catherine made her social debut in 1879 as a wealthy, popular young heiress. However, her life took a profound turn when, after nursing Emma Drexel for three years during a terminal illness, she realized that her family’s fortune could not buy freedom from pain or death. She became a very active and staunch advocate for the black and native Americans after witnessing their plight during a family trip to the Western United States in 1884.

At the prompting of Pope Leo XIII, the young heiress became a missionary religious in 1891 and established the Sisters of the Blessed Sacrament to work among the American Indians and Afro-Americans. Her decision to enter religion rocked Philadelphia social circles, one newspaper carrying the banner headline: “Miss Drexel Enters a Catholic Convent—Gives Up Seven Million." 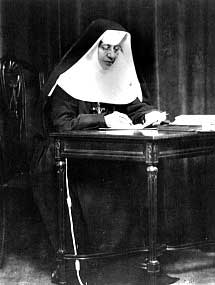 Over the course of the next sixty years, Mother Katharine Drexel, as she became known, devoted herself and her fortune to propagating her missionary work. By the time of her death in 1955, at the age of ninety-six, she had established a system of Catholic schools for blacks in thirteen states, twenty-three rural schools, and fifty missions for Indians in sixteen states. Her most famous establishment was Xavier University for Blacks in New Orleans in 1915 – it was the first of its kind in the United States and faced great opposition from radical racists.

Mother Katharine Drexel was canonized by Pope John Paul II on October 1, 2000, the second native-born American ever to be declared a saint after St. Elizabeth Ann Seton in 1774.
Posted by America Needs Fatima at 9:53 AM