One Good Turn Deserves Another 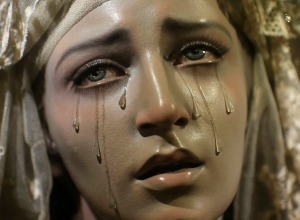 There was once a priest who had a special devotion to the sorrows of Mary. He would often remain alone in the chapel to commiserate the sorrows of his Lady.
So intently did he meditate on the sorrows endured by Mary Most Holy that, moved by compassion, he was accustomed to wipe the face of a statue of the sorrowful Virgin with a little cloth, as though real tears flowed there.
Now this good priest became quite ill. When he was given up by his physicians, and was going to breathe his last, he saw a beautiful Lady by his side. She consoled him with her words, and with a handkerchief gently wiped the sweat from his brow.
With this, the priest was miraculously cured.
When he found himself well, he said: "But, my Lady, who are you who practice such charity towards me?" "I am she," answered Mary, "whose tears you have so often dried,” and she disappeared.
From the Glories of Mary, by St. Alphonsus Maria de Liguori.
Posted by America Needs Fatima at 12:30 AM

Email ThisBlogThis!Share to TwitterShare to FacebookShare to Pinterest
Labels: Prayers