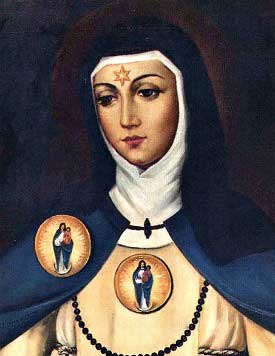 Beatriz de Menezes da Silva was one of eleven children of Rui Gomez da Silva, the first Magistrate of Campo Maior, on the border of Spain and Portugal, and of Isabel de Menezes, an illegitimate daughter of Dom Pedro de Menezes, the 1st Count of Vila Real and the 2nd Count of Viana do Alentejo, under whom Silva served in Ceuta. João de Menezes da Silva, better known as Blessed Amadeus of Portugal and a noted reformer of the Order of Friars Minor, was her brother.

In 1447 Beatriz accompanied the Princess Isabel of Portugal, to Castile as her lady-in-waiting when Isabel left to marry King John II of Castile and became Queen of Castile and León. Although they had been close friends, Beatriz's great beauty began to arouse the irrational jealousy of the Queen, who had Beatriz imprisoned in a tiny cell without food.

During her incarceration, Our Lady, attired in the blue and white habit of the Conceptionist Order, appeared to Beatriz and instructed her to found an order in her honor. With much difficulty, she finally escaped her imprisonment after three days and took refuge in the Dominican monastery of Toledo. Beatriz lived with the Dominicans for nearly forty years without becoming a member of the Order.

Queen Isabel was a frequent visitor during those years and was of great material assistance to her former lady-in-waiting in the foundation of the religious order in honor of the Immaculate Conception of Mary Most Holy. In 1484 Beatriz, with some companions, took possession of a monastery in Toledo deeded to their new community by Queen Isabel. The new religious order adopted the Cistercian Rule in 1489, bound themselves to the daily recitation of the Office of the Immaculate Conception and were placed under obedience to the Archdiocese of Toledo. 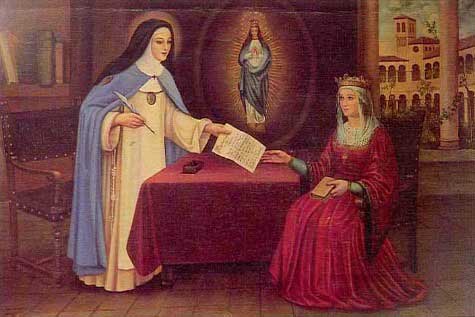 Beatriz da Silva died on August 9, 1492, ten days before the solemn inauguration of her new Order. She is buried in the first monastery given to the Conceptionists by Queen Isabel, the motherhouse of the Order in Toledo. In 1501, Pope Alexander VI placed the Conceptionists under the Rule of St. Clare and, in 1511, Pope Julius II granted them a Rule of their own.

Among Beatriz da Silva’s illustrious spiritual daughters are to be found two remarkable mystics: Madre Mariana de Jesús Torres y Berriochoa (c.1563-1635) to whom appeared Our Lady of Good Success and were given many revelations concerning the crisis in the Church in the twentieth century and the Venerable María de Jesús de Ágreda (1602-1665) author of the Mystical City of God.
Posted by America Needs Fatima at 2:56 PM