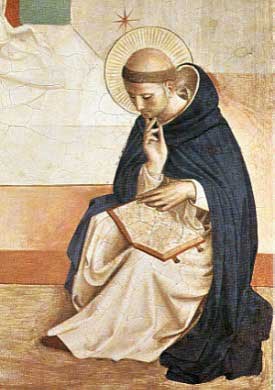 Dominic was born in 1170 in Castile, Spain to Felix Guzman and Joan of Aza (who later became a blessed). He was sent to school in Palencia when he was fourteen, and while he was still a student, was made Canon of the Cathedral of Osma. He went on to complete his studies and was ordained a priest, taking up his role at Osma.

Around the year 1204, Dominic accompanied the bishop of Osma to Denmark. Their travels took them through Languedoc, in southern France, where the Albigensian heresy, the belief that the body is evil, was rampant. The host at an inn where they stopped was an Albigensian. Dominic spent a whole night in discussion with him and by morning he had converted the innkeeper. That is when Dominic saw his true vocation in spreading and defending the Catholic Faith.

With papal permission, Dominic spent nearly ten years preaching in France with a small group of men living under the rule of St. Augustine. Then, in the year 1216, his small group became a community: the Order of Preachers. Dominic sent his followers far and wide, establishing friaries in Spain, France and Italy.

Dominic became ill and died in 1221 at the age of fifty-two.
Posted by America Needs Fatima at 7:28 AM