Not everyone in Versailles enjoyed this truce in the night between the 5th and 6th of October. Everything was at rest, except crime. The revolt had not yet completed its task; and these demons, these disguised brigands, who were shouting for bread when their pockets were full of gold, had not yet earned their pay. No, there was no sleep—for hate knows no fatigue—for the furies who had sworn to cut off Marie Antoinette’s neck on a milestone, and to dip their hands in her blood…. 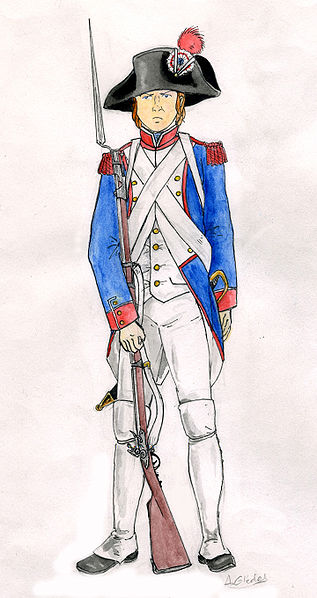 Let us first notice the insufficiency of La Fayette’s defensive measures, and the absence of any excuse for his fatal confidence. During the whole of the 5th, the gateway of the Ministers’ Courtyard was the point attacked by the populace, furious at finding this barrier. Well! Who guarded this gate which was of such importance for the defense of the palace? Two soldiers of the National Guard! Who protected the entrance of the marble staircase leading to the royal apartments? Two Swiss soldiers! Why was it that the royal battalions of the National Guard, which certainly contained trusty men, were not ordered to defend the approaches to the palace?

Why was it that their commander, instead of going to rest in the rue de la Pompe, did not stay in the palace, near his King, at the post of duty and of honor? Without doubt, La Fayette was no traitor; but, like men of his political complexion, he was absurdly optimistic, and he did not dread the danger which lay before his eyes. He lay down in good faith, and when he awoke from his short sleep, he was overcome with surprise at events which anyone else would have foreseen. 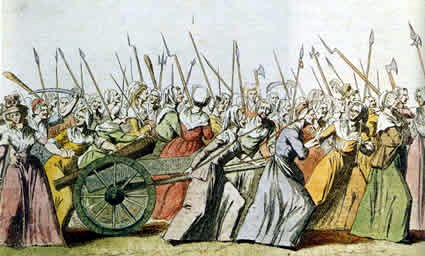 At half-past five in the morning, a great number of women suddenly made their appearance in the Place d’Armes. Many of them went up to the first gateway, that leading to the Ministers’ Courtyard, and the two National Guards who were stationed there opened the gate. The men, armed with pikes, at once followed, and the courtyard was filled. The crowd saw that the gate of the Princes’ Courtyard (the one leading to the middle of the palace, where dwelt the princes of the blood) was open, and the populace hastened thither, and entered the park by a door at the foot of the princes’ staircase. At that moment, Marie Antoinette was awakened by the noise beneath her windows. She rang for Madame Thibaut, and asked the meaning of this tumult.  Madame Thibaut replied that it was the women from Paris, who, probably, not being able to find any quarters, were walking on the terrace. The she withdrew; and the Queen, satisfied, remained in bed.

The Royal Court was still secure. The mayor of the bodyguard, M. d’Aguesseau, had just placed many guards in the passage of the colonnade leading from the Princes’ Courtyard to the Royal Courtyard; but those soldiers were too few to make any resistance, and the wave of rioters drove them back; the Royal Courtyard was invaded; one of the bodyguard, a man named Deshuttes, was disarmed in front of the gateway, struck down, and dragged, dying, to the end of the Ministers’ Courtyard. A ragpicker named Jourdan placed his foot on his chest, and cut off his head with an axe. This head was stuck on the point of a pike, and paraded through the streets as a trophy of the insurrection, and the victim’s body was carried to the barracks of the French Guard, and thrown on the straw. 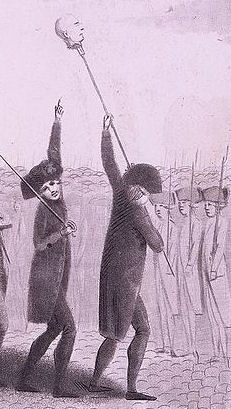 At the same time, the crowd made a violent attack on the marble staircase, which is near the Marble Courtyard, and led to the apartments of the King and Queen….

The marble staircase was defended by only two men of the Hundred Swiss guards. The crowd mounted the staircase….At the same moment the door between the marble staircase and the hall of the Queen’s Guards was burst open, and the rioters rushed in, calling for the death of Marie Antoinette. One of the guards on duty as sentinel before the the door of the first ante-chamber, M. de Varicourt, was struck from behind, and fell bleeding; the crowd seized him hustled him down the staircase, and dragged him through the Princes’ Gate into the Ministers’ Courtyard. He was still living, and struggling with his assassins, when Jourdan, the ragpicker, ran up, and with his axe, still dripping with the blood of M. Deshuttes, cut off his head….

Meanwhile Madame Thibaut had made the Queen get up and hurried her into her stockings and petticoat, and thrown a cloak over her shoulders…. 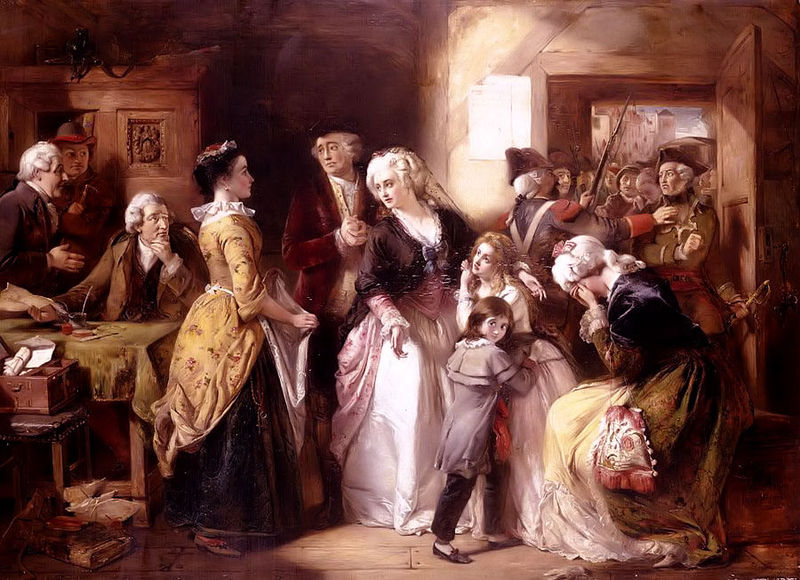 After a few moments’ sleep, of which it will be said that “he slept just long enough to ruin the King,” La Fayette woke up in the Noailles mansion. He did not wait for a horse to be brought, but started at once for the palace on foot, and proceeded to encourage his men to quell the disorder. Louis XVI himself thanked the members of the National Guard who had saved the lives of his bodyguard; then, always calm and self-controlled, he called the ministers together in the Council Hall. The Queen, the Dauphin, Madame Royale, Madame Elisabeth, the Count of Provence, the aunts, were all collected in the King’s bedroom. The Dauphin said to his mother, “Mamma, I’m hungry.” “Be patient,” answered Marie Antoinette; “this will soon be over.”

The palace courtyards were filled with battalions of the National Guard and with the populace. Marie Antoinette stood, perfectly calm, at a window, looking out on the vast throng. While everyone about her was giving way to tears or despair, she did not lose her head for a moment, but consoled and encouraged everyone.

Louis XVI went out on the balcony, with the same air of confidence and kindness that he always wore. Cries of “The Queen, the Queen!” were heard. La Fayette advised Marie Antoinette to show herself; he said it was the only way to allay the excitement. “Very well,” answered the Queen, “if I have to go to my execution, I shall not hesitate; I will go.” What was to take place? What was to be expected of these men, drunk, and wild with wrath, uttering angry cries and carrying loaded muskets? Would the assassins of the bodyguard hesitate at the murder of a woman, a queen? It was a solemn moment. Marie Antoinette, pale, with disheveled hair, appeared at the balcony of the King’s room, accompanied by La Fayette, and holding the Dauphin with one hand, her daughter with the other. The cries redoubled; shouts of “No children! No children! The Queen alone!” arose from all sides. What did this uproar mean? Did the demons who filled the place fear that the sight of the children would touch their hearts? Did the murderers who would gladly have slain the Mother hesitate about killing a boy and a girl? Without thinking about the probable evil significance of these shouts, Marie Antoinette gave the Dauphin and his sister to their father; then she came out alone, fearless, heroic, and calmly letting her eyes run over the multitude, folded her arms. 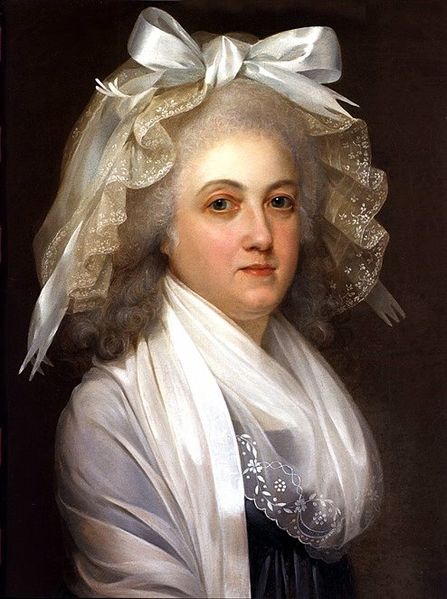 It was the daughter of the Caesars who appeared. The noble haughtiness of her brow, the dignity of her bearing, wrung from the crowd a shout of admiration and surprise. Even those who, a moment before, wanted to kill her, joined in the cry. A loud roar of “Long live the Queen!” burst forth. Marie Antoinette was not the dupe of this greeting; she heard the crowd shouting another alarming cry: “To Paris with the King!” and, leaving the balcony, she went up to Madame Necker, and said sadly, “They are going to make the King and me go to Paris, with the heads of our guards carried before us on the ends of their pikes.”

Short Stories on Honor, Chivalry, and the World of Nobility—no. 163