Did the Miracle of the Sun Really Happen?

The miracle of the sun was seen by over 70,000 people on October 13, 1917.   (See the newspaper clipping of the miracle below.)  As on the other occasions, the seers, Lucia, Francisco and Jacinta, first saw a bright light, and then they saw Our Lady over the holm oak.

Here is the conversation between Our Lady and the 3 children:

Lucia: What does Your Grace wish of me?

Our Lady: I wish to tell you that I want a chapel built here in my honor. I am the Lady of the Rosary. Continue to pray the rosary every day. The war is going to end, and the soldiers will soon return to their homes.

Our Lady: Some yes, others no. They must amend their lives and ask forgiveness for their sins.

Becoming sadder, she added, “Let them offend Our Lord no more for He is already much offended.”

Then, opening her hands, Our Lady shone the light issuing from them onto the sun, and as she rose, her own radiance continued to be cast onto the sun.

At that moment, Lucia cried, "Look at the sun!"

Once Our Lady had disappeared in the expanse of the firmament, three scenes followed in succession, symbolizing first the joyful mysteries of the rosary, then the sorrowful mysteries, and, finally, the glorious mysteries. Lucia alone saw the three scenes; Francisco and Jacinta saw only the first. 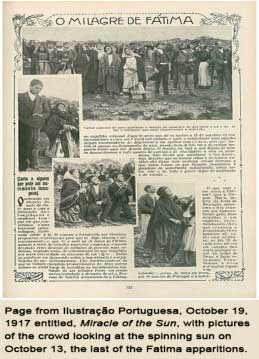 The second scene: A vision of Our Lady of Sorrows, without the sword in her breast, and of Our Lord overwhelmed with sorrow on the way to Calvary.

Our Lord made the Sign of the Cross to bless the people.

Lucia could only see the upper part of Our Lord's body.

The third scene: Finally, Our Lady of Mount Carmel, crowned queen of heaven and earth, appeared in a glorious vision holding the Child Jesus near her heart.

While these scenes took place, the great throng of 70,000 spectators witnessed the miracle of the sun.

It had rained all during the apparition. At the end of the conversation between Our Lady and Lucia – when the Blessed Virgin rose and Lucia shouted, "Look at the sun!" – the clouds parted, revealing the sun as an immense silver disk shining with an intensity never before seen – though not blinding. 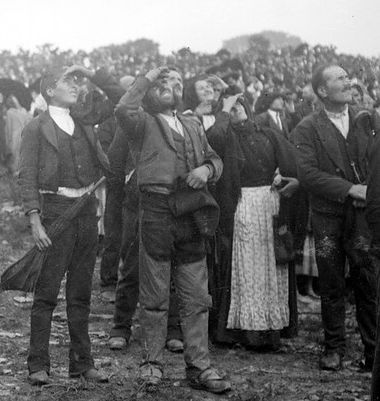 This lasted only an instant. Then the immense disk began to "dance."

The sun spun rapidly like a gigantic circle of fire. Then it stopped momentarily, only to begin spinning vertiginously again. Its rim became scarlet; whirling, it scattered red flames across the sky.

Their light was reflected on the ground, on the trees, on the bushes, and on the faces and clothing of the people, which took on brilliant hues and changing colors.

After performing this bizarre pattern three times, the globe of fire seemed to tremble, shake, and then plunge in a zigzag toward the terrified crowd.

All this lasted about ten minutes. Finally, the sun zigzagged back to its original place and once again became still and brilliant, shining with its normal brightness. The cycle of the apparitions had ended.

Many people noticed that their clothes, soaking wet from the rain, had suddenly dried.

The miracle of the sun was also seen by numerous witnesses up to twenty-five miles away from the place of the apparition.