Saint James The Moor Slayer and The Robbers Of Aubrac

During the twelfth century, Adalard, Viscount of Flanders, having set out on a pilgrimage to the shrine of St. James in Galicia, as was the custom of the pious knights in the Middle Ages, fell into an ambuscade of robbers on the way thither.

This place was situated on the summit of a high mountain, far away from any inhabited town, and often inaccessible on account of the snow and mist which covered it during the greater part of the year. It was known by the name of the mountain of Aubrac.

Seeing himself in danger of losing his life, Adalard made a solemn vow that if he escaped his present danger, he would found on that same place a hostel, where pilgrims might find shelter and rest, and at the same time banish from the mountain the robbers who had made it their stronghold. 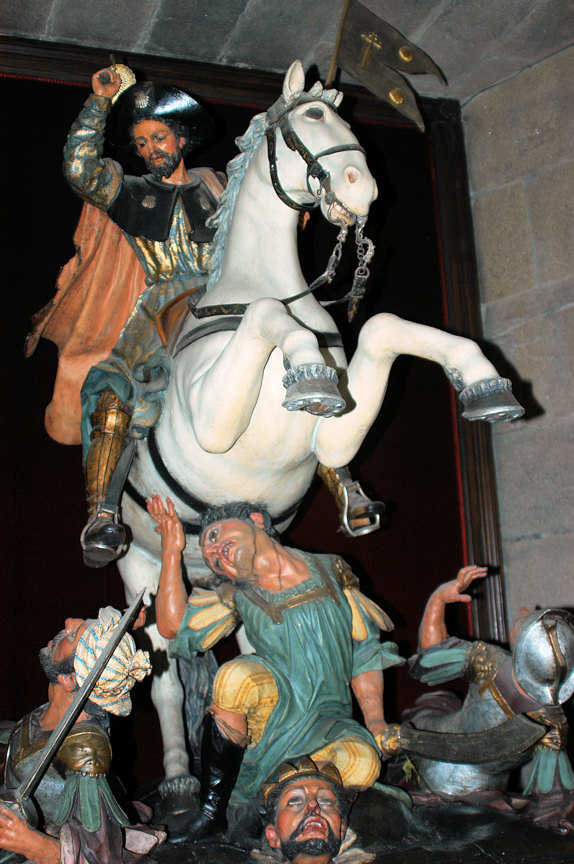 This pious vow was registered in heaven, and the Viscount gained a complete victory over his enemies. Many of the robbers lay dead on the declivities of the mountains, and all the others took refuge in flight.

Full of gratitude to God for coming to his assistance, Adalard called together the young knights who had accompanied him, by whose prowess also the enemies were repulsed, and made known to them the vow he had made.

“My friends,” he said, “if even brave knights like yourselves could not effect your passage through the denies of these mountains unless by force of arms, how can it be possible for those who are entirely unarmed, and the old men, and the women, and the children, to reach in safety the end of their pilgrim age? Is it not a work worthy of a Christian to purge these mountains of the hordes of evil men which infest them, and to establish on the very spot where we have gained our victory a house of refuge for these pilgrims?”

The knights, having with one accord applauded this generous resolution, continued their route, and soon reached the place of intended pilgrimage without further molestation. 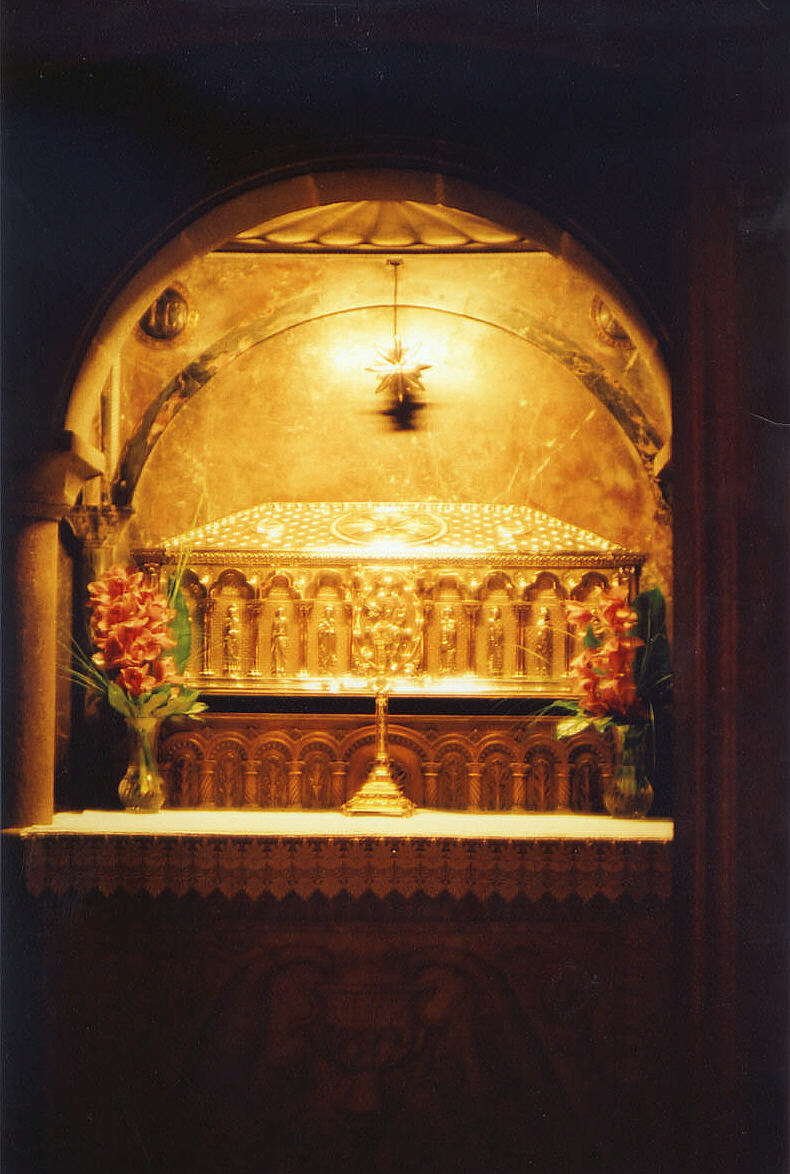 Tomb of St. James the Great

Adalard, having reached the tomb of the Apostle of Spain, and having laid the offering he had brought on the altar of the shrine, received, in return, the staff of the pilgrim. When he had finished his devotions he left .the town, and began to retrace his steps homeward. Mindful of his vow, and the glorious events which had occurred on the mountains, he went thither a second time with all the speed at his command. God was waiting for him there. When he reached the place where the robbers had attacked him, a violent tempest, such as frequently break out in these places, arose, and a gust of wind, more fierce than the others, raised him from the ground and cast him, along with his horse on which he rode, into a deep crevice hidden by the snow.

This new danger brought again even more vividly before him the remembrance of his vow, and he renewed it with the utmost fervor, at the same time adding that, if he should escape this new danger, he would for the rest of his life consecrate himself to God in that same place.

The monastery and hospital (Hôtel-Dieu) that served as the Order’s headquarters was called the Dômerie d’Aubrac. It was founded in 1031 by Adalard, Viscount of Flanders in the village of Aubrac, southern France.

God again heard his prayer and accepted his vow. In a short time his followers were able to reach him, and bring him out of his perilous position. It is related that Our Lord Himself, to confirm him in his good resolution, appeared visibly to him, and showed him near the highway a cave in which lay the bodies of nearly thirty pilgrims whom the robbers had slain in order to obtain what money they possessed, and ordered him to found there a noble church to His honor and to that of His blessed Mother, wherein many would find rest and security in the day of peril. 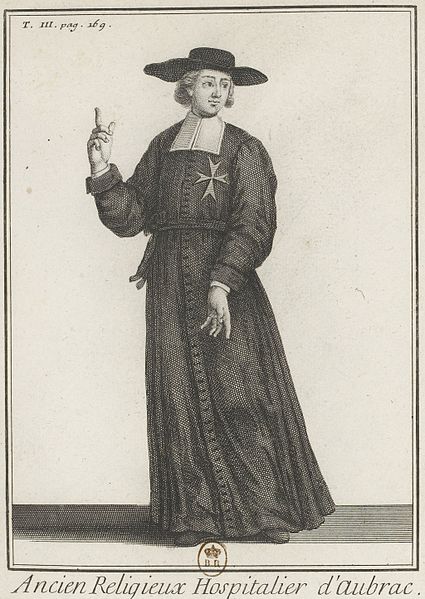 The Order of Aubrac was an Augustinian hospitaller and military order founded, with its headquarters at Aubrac in 1162. It was to safeguard the local hospital for pilgrims on the Way of Saint James to Compostela and on their way to Rome.

Faithful to the orders vouchsafed him by God, he, on that very day, caused a humble cabin to be erected, covered with branches of the dwarf trees that grew upon the mountain, and took up his abode within it. Adalard soon saw that God blessed his work abundantly. In it His holy Name was glorified by all the people, the poor found comfort, the grieving ones consolation, and the pilgrims rest and safety. Aubrac, once the stronghold of robbers, and the scene of many murders, soon offered to the world an image of the heavenly Jerusalem.

Short Stories on Honor, Chivalry, and the World of Nobility—no. 495