Born about 554; died probably in 617. His earliest biographies, two in Latin and two in German, did not appear until after 1417. Their narrative is the following: Wendelin was the son of a Scottish king; after a piously spent youth he secretly left his home on a pilgrimage to Rome.

On his way back he settled as a hermit in Westricht in the Diocese of Trier. When a great landowner blamed him for his idle life he entered this lord’s service as a herdsman. Later a miracle obliged this lord to allow him to return to his solitude. Wendelin then established a company of hermits from which sprang the Benedictine Abbey of Tholey. He was consecrated abbot about 597, according to the later legends. Tholey was apparently founded as a collegiate body about 630.

It is difficult to say how far the later biographers are trustworthy. Wendelin was buried in his cell, and a chapel was built over the grave. The small town of St. Wendel grew up nearby. The saint’s intercession was powerful in times of pestilence and contagious diseases among cattle. When in 1320 a pestilence was checked through the intercession of the saint, Archbishop Baldwin of Trier had the chapel rebuilt. Baldwin’s successor, Boemund II, built the present beautiful Gothic church, dedicated in 1360 and to which the saint’s relics were transferred; since 1506 they have rested in a stone sarcophagus. Wendelin is the patron saint of country people and herdsmen and is still venerated in Germany, Austria, and Switzerland. He is represented in art as a youth, or as a bearded man, with a shepherd’s bag and a book in one hand and a shepherd’s crook in the other; about him feed lambs, cattle, and swine, while a crown and a shield are placed at his feet. St. Wendelin is not mentioned in the Roman Martyrology, but his feast is observed in the Diocese of Trier on 22 October. 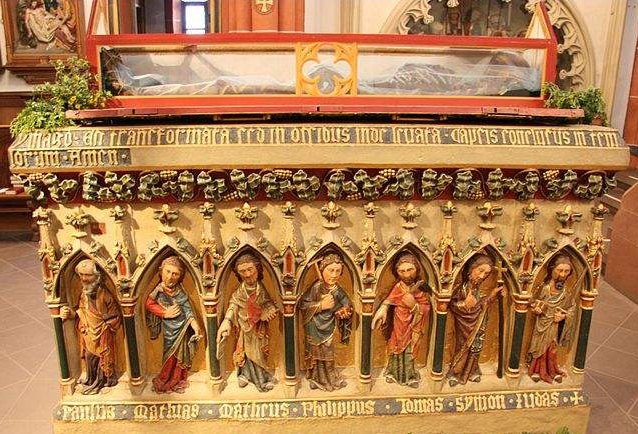 The exposed relics of St. Wendelin at Wendalinusbasilika St. Wendel during the 650th Anniversary of the consecration of the Basilica.