Centuries ago, in Toledo, Spain, there lived a Cistercian nun called Mary. Being at the point of death, the Blessed Mother appeared to her, and Mary said to her:
"Oh Lady, the favor you do me of visiting me at this hour emboldens me to ask you another favor, namely, that I may die at the same hour that you died and entered into heaven.” 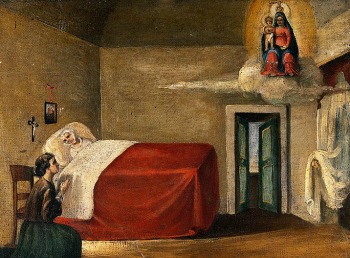 "Yes," answered Mary Most Holy. "I will satisfy your request; you will die at that hour, and you will hear the songs and praises with which the blessed accompanied my entrance into heaven; and now prepare for your death."
When she had said this she disappeared.
Passing by Mary’s cell, other nuns heard her talking to herself, and they thought she must be losing her mind. But she related to them the vision of the Virgin Mary and the promised grace. Soon the entire convent awaited the desired hour.
When Mary knew the hour had arrived, by the striking of the clock, she said:
"Behold, the predicted hour has come; I hear the music of the angels. At this hour my queen ascended into heaven. Rest in peace, for I am going now to see her."
Saying this she expired, while her eyes became bright as stars, and her face glowed with a beautiful color.
From the Glories of Mary, by St. Alphonsus Maria de Liguori.
Posted by America Needs Fatima at 9:52 AM