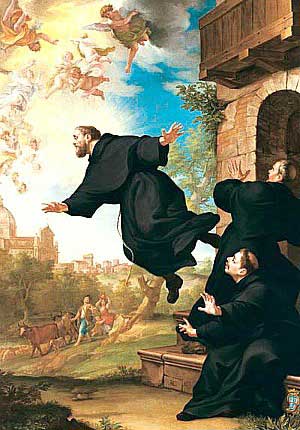 Joseph was born in 1603 in the small village of Cupertino, Italy, to very poor parents. After his father died, his mother spared him no love and considered him a burden. She would often abuse Joseph, which caused him to become slow and absentminded. He was forgetful, and wandered around the village with his mouth open, causing him to become nicknamed “Boccaperta,” or “the gaper.”

When he was seventeen, Joseph went out in search of a job. However, the abuse he suffered as a child caused him to lack self discipline, and he never lasted long. The first two times he tried to enter religious life, he was turned away, but the third time, the Conventual Franciscans of Grottella accepted him as a stable boy. Joseph came closer to Christ, and often did extreme fasting and acts of mortification. He was ordained in 1628 after a five-year struggle with his priestly studies.

During the seventeen years Joseph remained at Grottella, God worked many amazing miracles through him. Over seventy times, people saw him rise from the ground while saying Mass or praying and he often went into ecstasy and would be completely rapt up in talking with God. Joseph became so famous for these miracles that he was often followed by large crowds of people and had to be kept hidden.

From 1653 until his death, Joseph was placed in complete seclusion from the outside world, restricted from writing letters and receiving visitors. Though he was isolated from humanity, he became even more loved of God: his supernatural manifestations had begun to occur daily, and his seclusion left him free of distraction to pray.