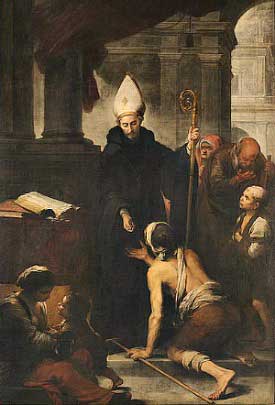 Thomas was born in Castile, Spain in 1488. His family was not wealthy, but his father’s work as a miller allowed the family to be charitable and generous towards the poor. He was sent to school at the University of Alcala at the age of sixteen, where he threw himself enthusiastically into his studies and, ten years later, became professor of philosophy.

In 1516 he joined the Augustinian Friars at Salamanca and was ordained a priest two years later. He eventually became prior in several houses of the Augustinian Order, notably Salamanca, Burgos, and Valladolid. When Don Jorge, the Archbishop of Valencia, resigned, the emperor did not offer Thomas the see because he knew the high position would be a grievous trial for the humble friar-priest. Instead, the emperor nominated a religious of the Order of St. Jerome. However, when the emperor discovered his secretary had written the name of Brother Thomas of Villanova on the letter of nomination, he took it as a sign from God and appointed Thomas bishop. The year was 1545.

Thomas immediately began to restore the spiritual and material life of the archdiocese. He was deeply committed to the poor, established care for orphans and convinced the emperor to provide funds to organize priests for service among the converted Moors who had lapsed back into their old religion for lack of a shepherd.

Renowned for his personal charity, sanctity and austerities, Thomas was eventually consecrated archbishop. While he did not attend the sessions of the Council of Trent, he was an ardent supporter of the Reformation against the Lutheran heresy.

Thomas of Villanova died in 1555 of angina at the age of sixty-seven. He was canonized by Pope Alexander VII on November 1, 1658.
Posted by America Needs Fatima at 10:03 AM