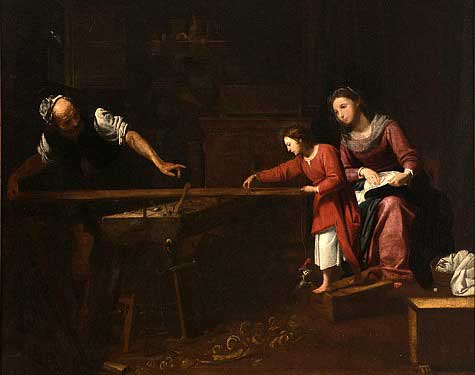 St. Joseph, the husband of the Blessed Virgin Mary and foster-father of Jesus has two feasts: his official feastday on March 19, celebrated for centuries; the second feast on May 1, celebrating the holy patriarch as a model of workers.

Pope Pius XII established the latter feast in 1955 to counterbalance and Christianize “May Day,” a Communist celebration of labor.

If anyone ever glorified and dignified labor, St. Joseph did. Born a direct descendant of King David, he was of royal lineage, and thus a true claimant to the throne of Israel. Through the political circumstances in Israel at the time he lived, and by God’s express will, he took up the honorable profession of carpenter and supported his holy spouse and adopted Divine Son for many years by the work of his hands.

It is safely surmised that Jesus worked alongside his foster-father in his workshop at Nazareth, stamping his divine seal on the dignity of labor. “Workmen and all those laboring in conditions of poverty will have reasons to rejoice rather than grieve, since they have in common with the Holy Family daily preoccupations and cares.” (Pope Leo XIII)

Work is not only a duty and thus character-building and dignifying, but also penitential. As Catholics we look at the hardships and toil of work as something to be united to the suffering of the God-man, Our Lord Jesus Christ, and thus be rendered meritorious for ourselves and others. “By enduring the hardship of work in union with Jesus, the carpenter of Nazareth and the one crucified on Calvary, man collaborates in a certain fashion with the Son of God in His redemptive work…Work can be a means of sanctification and a way of animating earthly realities with the Spirit of Christ.” (CCC 2427)
Posted by America Needs Fatima at 9:00 AM