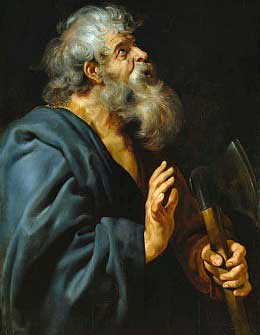 The Greek name “Matthias” means “gift of Yahweh”. All we know for certain of Matthias is that he was chosen by the eleven apostles to replace the traitor, Judas, after the Ascension of Jesus and before the descent of the Holy Ghost on Pentecost, which makes St. Matthias the only apostle not directly chosen by Our Lord.

According to the Acts of the Apostles (1:15-26), after the Ascension, Peter stood up in the midst of the brothers (120 of Christ’s disciples) and said: “…it is necessary that one of the men who accompanied us the whole time the Lord Jesus came and went among us, beginning from the baptism of John until the day on which he was taken up from us, become with us a witness to his resurrection” Acts 1:21-22. So it is clear that Matthias had followed Jesus since Our Lord's baptism by John in the Jordan.

For the selection of the new twelfth apostle, after a prayer beseeching God to guide them in His divine will, the eleven apostles cast lots between a Joseph, called Barsabas, and Matthias. The lot fell on Matthias who took his place among the first apostolic college.

According to Nicephorus' Church history, Matthias first preached in Judea and then in Ethiopia, where he was ultimately crucified.
Posted by America Needs Fatima at 7:22 PM