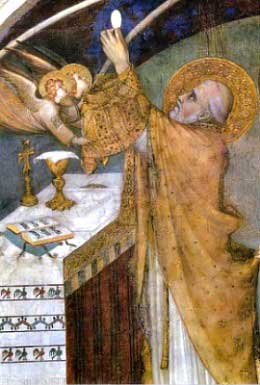 St. Eucherius of Lyons, describes St. Vincent of Lérins as “a man pre-eminent in eloquence and learning”. Little is known of his early life, though it seems that he was a soldier before taking the religious habit on the Mediterranean island of Lérins, now St. Honorat Island, after its founder.

His fame rests on his work, Commonitorium Against Heresies, which he wrote three years after the Council of Ephesus. Because of the many heresiarchs, each proposing a different heresy in the first centuries of the life of the Catholic Church, St. Vincent felt the need and the calling to define what constitutes heresy.

From the writings of the Church Fathers, he recorded certain principles for distinguishing Christian Truth from falsehood. These notes expanded into his Commonitorium, a serious treatise of forty-two short chapters, from which an immense body of literature has emerged.

He asks why, Scripture being complete, we need to guide ourselves by the interpretation of the Church: “For this reason,” St. Vincent explains, “…owing to the depth of Holy Scripture, all do not accept it in one and the same sense, but one understands its words in one way, another in another, so that it (Scriptures) seems to be capable of as many interpretations as there are interpreters. For Novatian expounds in one way, Sabellius in another, Donatus in another, Arius, Eunomius and Macedonius in another, Photinus, Apollinaris and Priscillian in another, Jovinian, Pelagius and Caelestius in another, and lastly Nestorius in another. Therefore, it is very necessary, on account of so great intricacies of such various errors, that the rule for the right understanding of the prophets and apostles should be framed in accordance with the standard of Ecclesiastical and Catholic interpretation. “ (The Vincentian Canon, Commonitorium)

In this book St. Vincent goes on to enunciate for the first time the axiom that for a dogma to be regarded as Catholic Truth it must have been held always, everywhere, and by all.

The exact date of St. Vincent’s death is uncertain, but is believed to have been in the year 445.
Posted by America Needs Fatima at 12:56 AM