Pachomius was born to pagan parents in Upper Thebais in Egypt in the year 292. According to one biographer, he was unwillingly drafted into the Emperor’s army when he was about twenty years old. Along with others pressed into the service of the emperor, Pachomius was ferried down river to Thebes, in which city the young pagan encountered Christians for the first time. So much did they impress him, as he observed them daily bringing food and comfort to the army recruits, who were kept close confined and ill-treated, that he vowed to investigate the Christian religion thoroughly once he had completed his time in the service of the Emperor. He later converted and was baptized in the year 314. 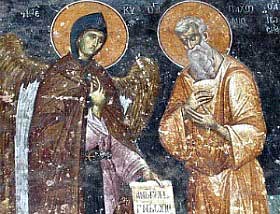 A few years after his conversion, Pachomius became acquainted with several well-known ascetics and decided to pursue their way of life. After seven years of preparation and study under the guidance and direction of a hermit named Palemon, Pachomius received the habit of a monk and set out to join St. Anthony of Egypt in the desert.

For a time Pachomius imitated Anthony’s solitary asceticism, living in his own hut, as the other followers of the great desert father did, and meeting occasionally with them for divine worship. Some time later, Pachomius heard a voice which instructed him to build a monastery at Tabennisi on the banks of the Nile where hermits who were physically or mentally unable to follow the rigor of Anthony’s solitary life could come to live as a community. Thus Pachomius is considered the first founder of cenobitic monasticism.

The first to be received into this new monastic community was his eldest brother John; within a short time their number grew to a hundred. Not only was Pachomius obliged to expand this first monastery at Tabennisi, but eventually, when this became inadequate, to build ten additional monasteries for men and two convents for women. For forty years he ruled the cenobites as their abbot. By the time of his death in 348, there were some seven thousand monks living under the monastic rule he had drawn up for them.
Posted by America Needs Fatima at 11:52 AM