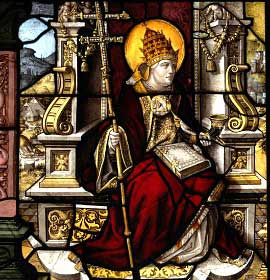 Cornelius was elected to the papal dignity during a time in which both the Church and civil society were in great turmoil. About the year 250, Rome was ruled by the Emperor Decius, who savagely persecuted Christians. He ordered all Christians to deny Christ by offering incense to idols or through some other pagan ritual. Many Christians refused and were martyred, among them St. Fabian, the Pope, while others burnt the sacrificial incense in order to save their own lives. In hopes that Christianity would fade away, Decius prevented the election of a new pope. However, he was soon compelled to leave Rome to fight the invading Goths and, in his absence, the papal election was held.

By 251, the Church had endured fourteen months without a pope when Cornelius was elected, much against his will. After the persecution, the Church became divided in two. One side, led by the Roman priest Novatian, believed that those who had stopped practicing Christianity during the persecution could not be accepted back into the Church even if they repented. Under this philosophy, the only way to re-enter the Church would be re-baptism. The opposing side, headed by Pope Cornelius, did not believe in the need for re-baptism. Instead, he believed the sinners should only need to show contrition and perform penance to be welcomed back into the Church. Novatian resisted Cornelius and declared himself Pope – thus becoming History's first antipope.

Later, during that same year, a synod of western bishops supported Cornelius, condemned the teachings of Novatian, and excommunicated him and his followers. When another persecution began in 253 under Emperor Gallus, Pope Cornelius was first exiled and then died as a martyr.
Posted by America Needs Fatima at 12:01 PM