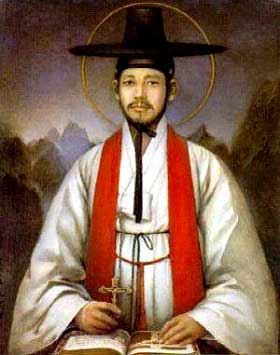 During the 17th century the Christian faith was brought to Korea through the zeal of lay persons. From the very beginning these Christians suffered terrible persecutions and many suffered martyrdom.

Son of Korean converts who were martyred during the persecution of 1839 (and beatified in 1925), Andrew Kim Tae-gon was baptized at fifteen. He traveled thirteen hundred miles to the seminary in Macao, China, and was ordained to the priesthood six years later. He traveled back to his home and became involved in smuggling missionaries into the country to spread Christianity.

During the year 1846, he was arrested with Paul Chong Ha-sang and their companions, and they were all tortured prior to being beheaded for his beliefs. Among them were a few bishops and priests, but for the most part lay people, men and women, married and unmarried, children, young people, and the elderly.

These martyrs suffered greatly and gave their lives for Christ for the religious freedom which came in 1883. Pope John Paul II canonized them on May 6, 1984, during his trip to Korea.
Posted by America Needs Fatima at 12:12 PM