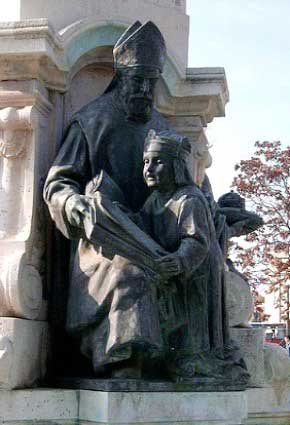 Gerard was a Venetian, born in the beginning of the eleventh century. At a young age, he consecrated himself to God and dedicated his life to fighting for Christ. He joined the Benedictine monastery of San Giorgio Maggiore at Venice. Not long after, he began a pilgrimage to Jerusalem, and was passing through Hungary when King Stephen – the future St. Stephen – asked him to remain and tutor his son. Finding the people of Hungary likewise in need of evangelization, Gerard decided to stay and preach.

On the death of King Stephen, Hungary was thrown into anarchy by competing claims to the throne, and a revolt against Christianity and Gerard ensued. On September 24, 1046, he was attacked and beaten, but still forgave his assailants. As a spear was thrust into his body he prayed, “Lord, lay not this sin to their charge, they know not what they do.”  His dead body was thrown into a river below.

Gerard and King Stephen were canonized in 1083. St. Gerard is considered one of the patrons of Hungary.
Posted by America Needs Fatima at 9:00 AM