I had the chance to spend some quality time with the International Pilgrim Virgin Statue of Our Lady of Fatima, as she went from church to church in Kentucky. 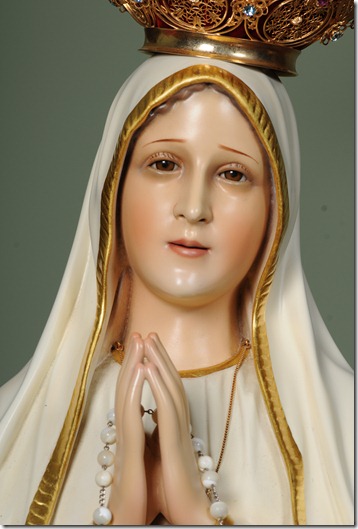 I was AMAZED at the reaction of some protestant Kentuckians to this miraculous statue.

For example, I just had a conversation with two ladies that work at the place we are staying. One of them was on the verge of tears when I told her about our Lady's apparitions and her message to the world.

She then said that her grandfather was a protestant minister but that she had fallen away from religion and "felt the need to get closer to God".

Not having time to do or say more at the moment, I simply suggested that she go before the statue when she returns in a few days and "address her as you would your own mother and ask Her to put you on the right path."

I so hope that this lady will do what I suggested and that our Lady will work marvels in her soul and bring her to the true religion.

Also, another lady that works here also took time to stop by and visit our Lady's statue.  She was obviously not Catholic by the way she spoke in a loud way in front of the Blessed Sacrament. But she like the others was extremely moved by the beauty of the statue.

Please pray for this part of Kentucky, which is very protestant.  But I cannot help but think that she is leaving a trail of Gold Dust in the her wake. She literally converts souls by her mere presence and does more with a simple gaze than many others do by hours of talk.

Posted by Robert Ritchie at 5:12 PM