Gaudentius succeed St. Philastrius as Bishop of Brescia, Italy, under whom he seems to have studied, and whom he calls his “father”. Prior to his election, being very popular in Brescia, Gaudentius went on pilgrimage to Jerusalem hoping to be forgotten. But upon returning and finding that his mentor had died, he also found that the Brescians would have no other as successor. He was consecrated by St. Ambrose in 387. A record of Gaudentius’ discourse made at the time of his elevation survives. 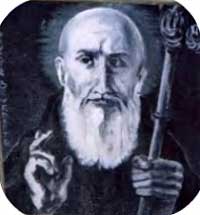 Brescia rejoiced in the treasure of so holy a pastor. A nobleman, Benevolus, who had been disgraced by the Empress Justina for refusing to uphold Arian beliefs, had retired to Brescia. Being ill, and missing the bishop’s Easter sermons, he convinced Gaudentius to write them for his benefit. Thus several of his sermons survive.

In 405, Pope Innocent I and Emperor Honorius charged Gaudentius to defend St. John Chrysostom, a personal friend of the bishop, before Emperor Arcadius. St. John Chrysostom had been unjustly accused by a heretic and exiled, and he had been replaced by another.

Ill received, the delegates were imprisoned in Thrace. Ultimately they were returned safely to Italy, though in a most untrustworthy vessel. Despite the failure of the mission, St. John Chrysostom sent a letter of thanks to his friend. Gaudentius died around the year 410.
Posted by America Needs Fatima at 11:11 AM