The Miracle of the Sun: Seal on a Serious Message

The apparitions of the Blessed Mother in Fatima, Portugal, May, 1917 to three children, Lucia, Francisco and Jacinta, were Gospel-like in their seriousness, simplicity and credibility. All events prophesized were fulfilled, and so was Our Lady’s promise of a sign at the sixth and last apparition.
Adding to the believability of the miraculous event, the chosen seers were very young, simple and innocent, incapable of conjuring or embellishing. 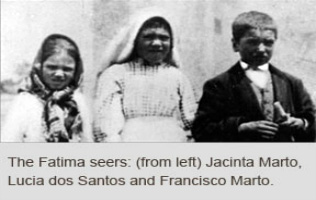 When Our Lady spoke, she spoke like a messenger, plainly and objectively, although touchingly attentive to the children, their questions and needs.
The theme of her message ran throughout the consecutive visits: sin must stop; prayer (especially the Rosary), penance and conversion of life must be adopted by humanity or there would be terrible consequences.
And she promised a portentous sign “for all to believe” which set Portugal abuzz.
It was a “bad” time for such an apparition and such a promise in Portugal.
In 1908 King Carlos I and his heir Prince Luis Felipe, had been assassinated, and a Republic established. The new government was adamantly anti-religious and anti-clerical and aimed at secularizing centuries-old Catholic Portugal.
Thus, the Fatima apparitions deeply disturbed the status-quo, which went as far as imprisoning the children for a short while.
But God was indeed at work at Cova da Iria, Fatima, and a sign had been promised.
And the sign happened.                      Free copy of Meet the Witnesses
On October 13, about 70,000 spectators filled Cova da Iria, among them journalists, the curious and the incredulous.
The day was rainy. The seers saw a bright light, after which Our Lady appeared atop the usual holm oak. Mary asked for a chapel to be built, and revealed that she was the “Lady of the Rosary”.
She predicted that WWI would soon end, and that the soldiers would come home.
Lucia asked for the cure of some sick persons to which Our Lady responded: “Some yes, some no. They must amend their lives and ask forgiveness for their sins.”
Then she begged the world, “Let them offend Our Lord no more for He is already much offended.”

On saying this, she opened her hands and projected the light coming from them onto the sun."
Lucia cried, “Look at the sun!”
The heavy clouds parted revealing a huge silver disk. Though it shone intensely, it did not blind. The sphere began to dance, then spin rapidly like a gigantic circle of fire. It stopped momentarily, then spun vertiginously again, its rim scarlet, scattering flames through the sky. The changing lights were reflected on the faces of the spectators, on the trees and on the ground in fantastic hues.
After performing this bizarre pattern thrice, the fiery globe trembled, shook then plunged toward the earth in a zigzag. People screamed. All this only lasted a few minutes. The sun then zigzagged back to its place and re-assumed its normal appearance.
People noticed that their rain-soaked clothes were dry. So were the pools of water that had formed in the field. Engineers later affirmed that an enormous amount of energy was necessary to dry those pools in only a few minutes.
Numerous people also saw the miracle of the sun up to twenty-five miles away.
To the chagrin of secularists and support of the faithful, newspaper men in the crowd reported the miracle throughout the world.
Indeed, the miracle of the sun “sealed” the authenticity of the Fatima Message, a crucial message for our sinful, troubled times.

Click here to order your Free copy of Meet the Witnesses
By Andrea F. Phillips
References:
Our Lady of Fatima: Prophecies of Tragedy or Hope?  By Antonio A. Borelli and John R. Spann
Wikipedia online
Posted by America Needs Fatima at 10:30 AM