Born in the Kingdom of Naples in 1386, John of Capistrano was a most talented youth. He studied law in Perugia, was appointed governor of the city in 1412 and married the daughter of a wealthy citizen. 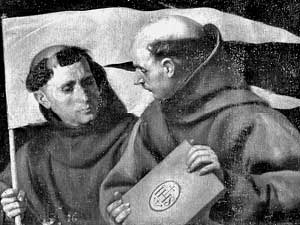 Imprisoned during hostilities between Perugia and the Malatesta, he had a vision of St. Francis of Assisi inviting him to join his order and resolved to dedicate his life entirely to God. His marriage not being consummated, John obtained a dispensation and joined the Franciscans in Perugia. He was ordained a priest in 1420, and made extraordinary progress in his theological studies, while leading a life of extreme austerity. His master was St. Bernardine of Siena for whom he bore a deep veneration and affection.

Gifted with oratory, he preached extensively throughout the length and breadth of Italy attracting huge crowds wherever he went. He also helped St. Bernardine of Siena with reforms needed within the Franciscan Order. He was especially interested in helping the Franciscan nuns of St. Colette and with the Third Order Franciscans. 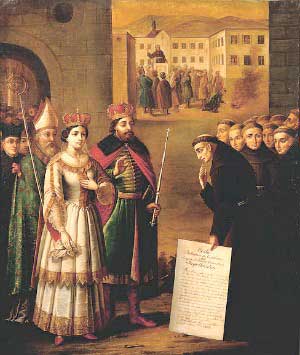 Frequently employed as ambassador by the Holy See, his missions on behalf of the Pope took him all over Europe. As Apostolic Nuncio to Austria, he helped Emperor Frederick III in his fight against the Hussite heresy and was appointed Inquisitor. He wrote many books, mainly combating the heresies of his day.

When Constantinople fell to the Turks, John of Capistrano preached a crusade in Hungary. At the age of seventy he personally led a wing of the army in the battle of Belgrade. Both his prayer and example were vital factors in the lifting of the siege. The infection spread by the decomposing bodies left unburied around the city ultimately took his life within a couple of months. He died peacefully at Villach on October 23, 1456.