The Largest Bouquet Ever!

Fatima, Portugal – On October 12, 2016, more than 25,000 red and white roses were offered to Our Lady of Fatima. Fatima being a center of pilgrimage, such an amount of roses attracted many a pilgrim to inquire the reason for such an enormous offering.
America Needs Fatima held its 10th year of Public Square Rosary Rallies in the United States and for every Rally Captain who committed to holding a Public Square Rosary Rally we delivered ONE RED ROSE in his or her name. We also offered a WHITE ROSE for every devotee of Our Blessed Mother who chose to sponsor a Rosary Rally by giving a donation to help make this enormous effort possible.
As the day approached for the offering, the weather forecast was the worst possible. In Portuguese the expression used by weather.com was, “aguaceiro e trovoadas” which can be translated into “pouring rain and thunder.” The odd thing was that all the other days of the week had been beautiful, sunny days.
We had lots of praying to do, beseeching our good Mother to push the clouds away. And she didn’t let us down! As the time came for the delivery, 2:00 p.m. on October 12th, the clouds moved away and even parts of the sky became blue. The sun became as warm as her smile and we were able to make the offering of a massive bouquet of roses to Our Lady and remain as dry as the pilgrims were after the Miracle of the Sun. 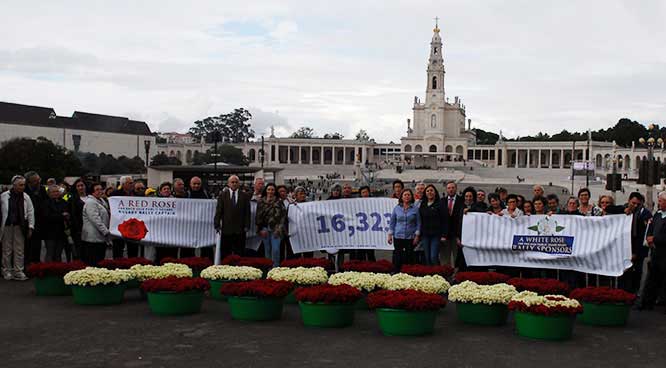 As we carried the massive vases in one by one, I had time to reflect on what this offering meant in today’s world. In the very spot where I stood Our Mother came to deliver a heavenly message of warning and salvation for our times. And here I was, 99 years later delivering more than 25,000 roses in thanksgiving to that same Mother. These roses I carried represented thousands of children of Mary who gathered throughout America to publicly and proudly pray the Rosary for America – just as Our Lady had asked of Lucia, Jacinta and Francisco nearly a century ago.
The beautiful roses basking in the Portuguese sun stood in sharp contrast to a world deep in moral trouble, a world that seems to move more and more away from God and His Divine law. It can only be by the grace of God that in such a sinful world, here at Fatima a huge act of love and devotion to Jesus and Mary could take place today.
Together with the rose offering our hopes and prayers went up to the Queen of Heaven beseeching her to hasten the fulfillment of her promise that “in the end my Immaculate Heart will triumph.” 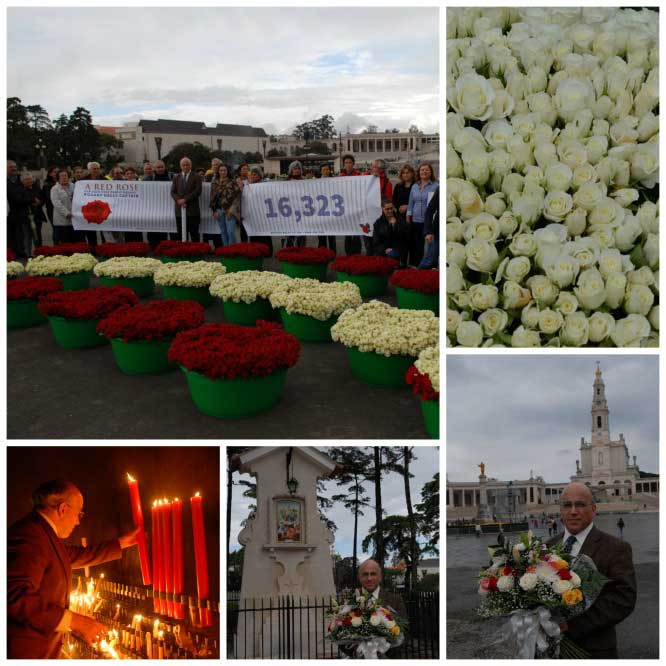