November is the Month of the Holy Souls

The powerful intercession of the souls in purgatory
Besides being a spiritual work of mercy and a powerful reminder of the afterlife, devotion to souls in Purgatory also affords us invaluable intercession as demonstrated by Church Tradition.
According to the dogma of the Communion of Saints, they form a part of the Church (called the Church Suffering) and are therefore united to us, and can intercede for us.


Click here:  Prayer to Our Lady to Overcome Temptation

Examples of this abound in Church History and many readers have undoubtedly experienced such intercession. We will relate a few examples below.
The Countess of Stratford, an English protestant, having doubts about the existence of Purgatory, consulted the Bishop of Amiens, France. Hearing her objection, he answered, "Tell the Bishop of London (an Anglican) that I will leave the Faith and become an Anglican if he can prove that Saint Augustine never celebrated Mass or prayed for the dead, especially his mother." 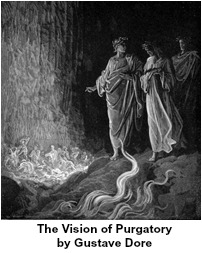 Following his advice, the Countess wrote the Anglican bishop of London. Seeing that he did not respond, she converted.
At a certain point during her reform of the Carmelites, Saint Teresa was in need of a convent. A noble named Bernadine of Toledo responded to her need and donated a place for the convent. He died shortly afterwards. Saint Theresa received the revelation that he would remain in Purgatory until the first Mass was celebrated in the convent he had donated. She thus hastened to establish its foundation. During communion of this first Mass, she saw his soul radiant with splendor at the side of the priest. Thanks to that Mass which had been said for him, he was freed from Purgatory.
Whenever Saint Catherine of Bologna's prayers seemed unanswered, she would call upon the intercession of the souls in Purgatory. She affirmed that these prayers were always answered.