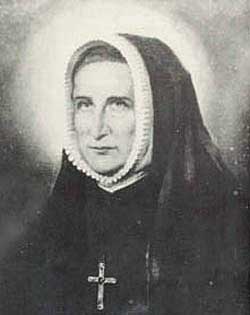 Born on August 29, 1769 in the French city of Grenoble, Rose Philippine was baptized in the Church of St. Louis. She was educated at the Convent of the Visitation of Ste. Marie d'en Haut and, against her father’s wishes, became a novice there when she was eighteen years old. However, the French Revolution caused much disruption for the nuns, and when the Sisters of the Visitation were expelled from their convents, Rose returned home.

She cared for the sick and the poor, helped fugitive priests, visited prisons, and taught children. Some time after the Revolution ended, she unsuccessfully tried to reestablish the Visitation community, and ultimately gave the convent to St. Madeleine Sophie Barat, foundress of the Society of the Sacred Heart of Jesus, and joined the Order. When the Bishop of New Orleans, William Du Bourg, requested nuns for his thriving diocese in Louisiana, Rose and four other nuns made the trip to America in 1818.

Rose and the nuns were sent to Missouri, pioneers of the New World. There, as well in neighboring states, they established multiple schools, built a convent, an orphanage, a mission school for Indian girls, a boarding academy and a novitiate for her Order. However, the strenuous and difficult regime of work for her apostolate took its toll on her body. She died in St. Charles, Missouri in 1852 after spending more than 30 years as a pioneer in the evangelization of the New World. She was canonized in 1988. Rose was truly devoted to God, and prayed in her every spare moment. Because of this, the Indians began to call her “Quah-kah-ka-num-ad,” or "Woman-Who-Prays-Always.
Posted by America Needs Fatima at 10:16 AM