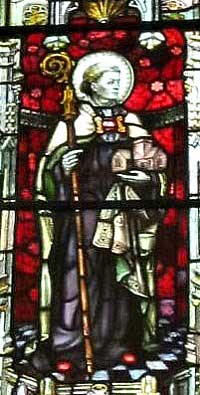 Brittany, on the west coast of France, was so named for the Britons – primarily from Wales, Cornwall and Devon – that settled there from the island of Britain during the fifth to the seventh centuries. When the Roman legions withdrew from Gaul in the middle of the fifth century, the long-established trade connections between the two peoples were reinforced by religious links from the mainland and the migrant Britons that settled in the region left a lasting impression of themselves upon the language, place-names and traditions of Brittany.

Illtud was the son of a minor Breton prince named Bican Farchog who lived with his wife in Brittany during the sixth century. His father was King Arthur’s uncle on his mother’s side, thus making him and Illtud cousins. It was while visiting his royal cousin that the young Illtud met and married a woman named Trynihid. Later, he crossed over to Britain while serving in Arthur’s army, and subsequently joined the military services of a chieftain in Glamorgan in southern Wales. As a warrior he distinguished himself and gained renown for his military prowess earning for himself the title of “Illtud the Knight.”

Grief-stricken by the loss of several of his closest friends in a hunting accident, the soldier-knight was miraculously converted by St. Cadoc, who advised Illtud to leave the military and become a hermit. For a short time he lived with his wife in a reed hut by the river Nadafan, before an angel appeared to him, counseling him to leave her. He received the monk’s tonsure and was ordained by Dubricius and lived in austerity and solitude until disciples began to gather round about him. He then established a monastery, which soon flourished and became the first great monastic school of Wales, known as Llanilltud Fawr.

According to legend, this school was situated on a small waste island, which, at his prayer, was miraculously reunited with the mainland. The story of the miracle may have been inspired by the fact that the saint was skilled in agriculture, for he is supposed to have introduced the Welsh to better methods of farming and to have helped them reclaim land from the sea.

Renowned for his wisdom and piety, Illtud is considered one of the greatest of the Welsh saints.
Posted by America Needs Fatima at 10:58 AM