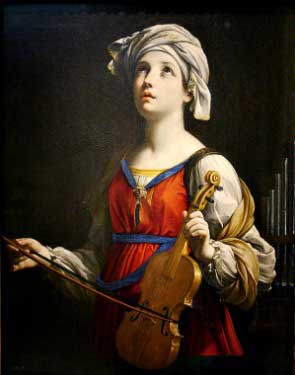 Cecilia was a devout Christian maiden of noble Roman birth who lived during the early part of the third century. At a very young age, she secretly dedicated herself to God, resolving to remain a virgin to her death. She fasted and prayed often, and wore a coarse shift under her clothes as a perpetual penance.

Although she had consecrated her body to the Lord, Cecilia’s father wished her to marry. She obeyed and married Valerian, the man her father had chosen for her. However, on the night they were married, Cecilia said to her new husband, “I have a secret to tell you. You must know that I have an angel of God watching over me. If you touch me in the way of marriage, he will be angry and you will suffer; but if you respect my maidenhood he will love you as he loves me.”

Skeptical of his new wife and her religion, Valerian demanded to be shown the angel. “If you believe in the living and one true God and receive the water of baptism,” Cecilia told him, “then you shall see the angel.” The young man agreed, and sought out Bishop Urban who baptized him. Upon his return, Valerian found Cecilia in prayer with a crown of roses and lilies on her head. He saw that beside her stood an angel, who immediately crowned him as well.

Soon after, Valerian’s brother, Tiburtius, found them praying in the chapel. He saw the crowns of flowers on their heads and the angel standing near and he, too, converted. From that time, the two brothers devoted themselves to the work of God. They were arrested and after refusing to pay homage to false idols, were tortured and killed.

Knowing that the two were married, officials visited Cecilia and tried to persuade her to worship the false idols. Instead, her holiness converted the officials who came to her door, and she was instead ordered to appear before Almachius, the provost of Rome. The provost entreated her to denounce Christ, and when she refused, condemned her to death. They barred her in her home and fed her furnace seven times the normal amount, an act that would have suffocated any other. However, after a day and a night spent in the fatal conditions, Cecilia still lived.

Almachius then sent a soldier to her house to behead her. The executioner struck her three times on the neck and still could not smite her head from her body. By law he could not do so a fourth time and he left her to die. During the three days of her agony, Cecilia gave all that she had to the poor, continually preached the faith, and all those who were converted by her words and example she sent to Pope Urban to be baptized. 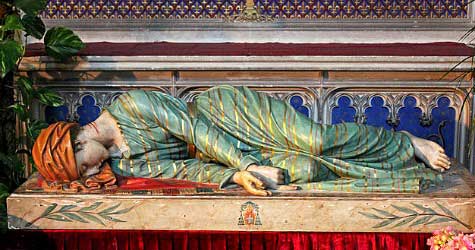 St. Urban and his deacons buried her among the bishops in the catacomb of St. Callixtus along the Apian Way. As she had requested, her house was transformed into a church by the Holy Pontiff and it has remained in the service of the Church until this day.

St. Cecilia is known as the patroness of musicians because it is said that during the three days in which she lay dying, the crowd that had gathered could hear angels singing.
Second Photo by: Claude Valette
Posted by America Needs Fatima at 11:05 AM