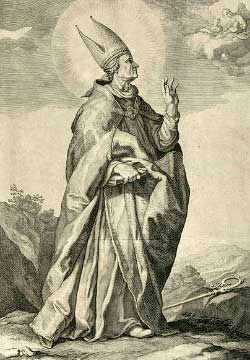 The last pagan king of the Frisians was noted for saying that he preferred to be in Hell with his ancestors than in Heaven without them. However, his great-grandson and namesake became a saint.

Under the tutelage of his maternal uncle, Gunther, Bishop of Cologne, the young Radbod often wrote hymns and poems about the saints. In the year 900 he wrote: “I, Radbod, a sinner, have been taken, though unworthy, into the company of ministers of the church of Utrecht; with whom I pray that I may attain to eternal life.”

Before the year was out, he was chosen bishop of that church. As the church of Utrecht had been founded by priests of a monastic order, Radhod made his profession as a monk before being consecrated its bishop.

From the time of his consecration the new bishop never ate meat, often fasted as long as three days and was renowned and loved for his kindness to the poor.

During a Danish invasion, Radhod moved his episcopal see from Utrecht to Denventer, and there died in peace in the year 918.
Posted by America Needs Fatima at 10:31 AM