Dedication of the Basilica of Saint John Lateran in Rome 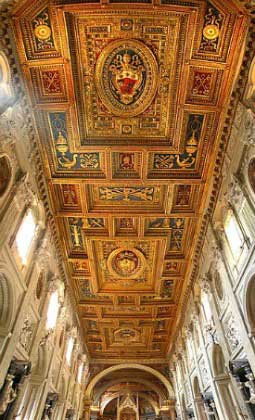 Although most Catholics believe the Basilica of St. Peter’s to be the main church of the Pope, it is not: St. John Lateran, also called the Church of Holy Savior or the Church of St. John the Baptist, is the Cathedral of the Diocese of Rome, or the Pope’s church. “The Lateran” was built on land that the Emperor Constantine received from the wealthy and virtuous Lateran family. He, in turn, gave the land to the Church, who constructed the first basilica there in the early fourth century.

Consecrated in 324 by Pope Sylvester, the Lateran Basilica was where cardinals were consecrated to the papacy until the fourteenth century when Pope Gregory XI returned the papal enclave from Avignon in France to Rome and arrived to find the Lateran and the nearby papal palace ruined beyond repair. The Lateran was not restored until many years later, when Pope Innocent X built the current structure in 1646. One of the most marvelous and imposing churches in Rome, it has five large statues of Christ, John the Baptist, John the Evangelist and twelve Doctors of the Church, and holds beneath the high altar what is left of the wooden table which St. Peter himself used as an altar to celebrated the Holy Sacrifice of the Mass.

Since the Basilica of the Lateran is officially the Pope’s cathedral, it is also considered the parish church of all Catholics. It is called “omnium urbis et orbis ecclesiarum mater et caput,” or "the mother and mistress of all the churches of Rome and of the world."
Photo by: Grenouille vert
Posted by America Needs Fatima at 9:41 AM