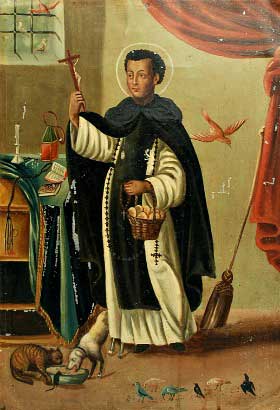 Born in Lima, Peru on December 9, 1579, Martin was the illegitimate son of Juan de Porras, a noble Spanish knight, and Ana Velázquez, a freed black slave from Panama. To his father’s great displeasure, Martin had inherited his mother’s features and dark skin, and while he acknowledged him as his son, soon after the birth of Martin’s sister Juana, Juan de Porras left the children to the care of their mother.

At the age of twelve, his mother apprenticed Martin to a barber-surgeon from whom he learned not only the duties of a barber but also how to draw blood and to prepare and administer medicine. Three years later, he entered the Dominican Priory of the Holy Rosary in Lima where he applied himself to the lowliest tasks. After many years, under obedience to his religious superiors, he was compelled to accept the habit of a professed lay brother, an honor that he had considered too great for himself.

Devoted to Our Lord’s Passion from his childhood, he lived a life of almost constant prayer. His charity, humility and obedience were extraordinary and he practiced unbelievable austerities. As almoner, Martin was charged with distributing the Priory’s alms to the poor. Oftentimes, it was noted that when the food was insufficient for the needs at hand, it miraculously increased. His skills as a surgeon were also in great demand within and outside the Priory walls and he was put in charge of caring for the sick, a duty he exercised with unfailing patience. With equal charity he ministered to Spanish nobles and the lowliest slaves, recently arrived from Africa. Cures became too numerous to count. But it was as much by his prayers as through his medical ability that he cured the most daunting diseases. Although he never left Lima once he entered the Dominican Order, Martin was seen in foreign countries by people who knew him well. He was known to bilocate to the bedside of the sick, consoling them in their sufferings, often curing them of their infirmities; he reserved his most tender solicitude for the dying. During prayer, he was often seen in ecstasy before the Blessed Sacrament, suspended in midair and surrounded by light.

St. Martin was a contemporary and close friend of both St. John Massias and St. Rose of Lima. Before his death, among other works of charity, he who had been abandoned by his own father founded a residence for orphans and abandoned children. He died on November 3, 1639 after a long and painful illness. The entire population of Lima, high-born and low, flocked to his funeral, at which the Prior himself officiated. Four of the humble lay brother’s closest friends – the Viceroy, the Archbishop of Mexico, the Bishop of Cuzco and the Judge of the Royal Court – carried his body to its resting place. Martin was beatified in 1837 and canonized in 1962.
Posted by America Needs Fatima at 2:13 PM