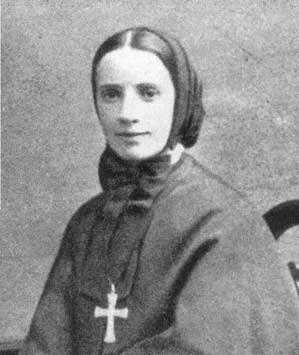 Born on July 15, 1850 into a family of Italian farmers near Lombardi, Frances was the youngest of thirteen children. Her parents, Augustine and Stella Cabrini, died in 1870 when she was eighteen, and Frances lived with her sister, Rosa. Though she was always a devout child, Frances became truly close to God as she grew older, and she became renowned for her holiness.

Around the year 1874, Frances was invited by her parish priest to assist at the House of Providence, an orphanage where she remained for six years. In 1877, she and seven of her close friends took their first vows. That same year, the Bishop asked her to found the Missionary Sisters of the Sacred Heart to care for poor children in schools and hospitals. She and her seven followers organized themselves at an old Franciscan friary at Codogno, and there Frances wrote a rule for the sisters to follow. By 1887, the process for the Missionary Sisters of the Sacred Heart to become officially recognized by the Church had begun, and houses were founded all over Italy. 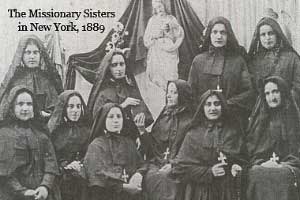 In 1889, Pope Leo XIII asked Frances to travel to New York with six of her sisters to work among the Italian immigrants. When she arrived on March 31, she discovered the plan had fallen through: there was no building in which to teach, no orphanage and no home for the hard-traveled nuns to stay. Archbishop Corrigan apologized and suggested the nuns return to Italy, to which Frances replied, “No, Monsignor, not that. The Pope sent me here, and here I must stay,” and within a few weeks, she made progress with her mission, ultimately establishing schools, hospitals, and orphanages.

In 1892, Frances completed her most well-known achievement: the Columbus Hospital in New York. This success led to houses and schools being opened in Brazil, Chile and Europe. By 1907, the Missionary Sisters of the Sacred Heart were officially recognized by the Catholic Church. Their small community had grown to over a thousand, and free schools, orphanages and convents had been established in eight countries.

Her body had been failing for six years, but Frances’s death came suddenly. She died in the convent in Chicago on December 22, 1917. She was canonized in 1946.
Posted by America Needs Fatima at 9:31 AM