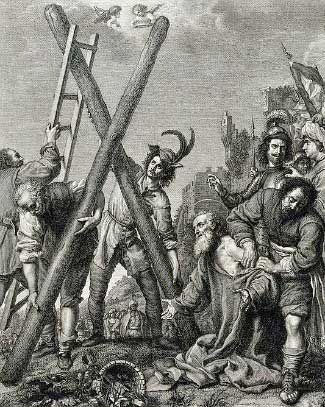 “O most beautiful Cross that was glorified by carrying the Body of Christ! Glorious Cross, sweetly desired, ardently loved, always sought, and finally prepared for my heart that has so long awaited you. Take me, O Cross! Embrace me. Release me from my life among men. Bring me quickly and diligently to the Master. Through you He will receive me, He, Who through you has saved me.”

Thus did the Apostle Andrew salute the cross upon which he was to die. For two days he hung upon it and never ceased preaching to the crowds that gathered round him. Who was Andrew? And how had he come to embrace so willingly – no, more, to long for – this universal symbol of infamy?

Andrew was an elder brother of Simon Peter and both plied their trade of fishermen on the tempestuous Sea of Galilee. Sons of Jonas, they lived in the fishing village of Bethsaida, a town much frequented by Our Lord during His public ministry. Andrew had become an early disciple of St. John the Baptist and it was while listening to him preach on the banks of the River Jordan one day that John’s words set him on a course he was to follow for the rest of his life. “Behold the Lamb of God,” proclaimed the Baptist on seeing Our Lord approach. Immediately, Andrew and another disciple followed Him.

The words of this beautiful prayer attributed to the Apostle Andrew upon meeting his cross show that he had known for a long time that he would be a martyr. He had meditated on it in relation to the Passion of Our Lord Jesus Christ. He entirely understood and loved the hour of his supreme suffering. He completely accepted the chalice God had prepared for him to drink.

The cross was a symbol of punishment and was reserved for criminals. But for Andrew, it was a “most beautiful” thing because it had been “glorified by carrying the body of Christ.”

Then, he added that he had “sweetly desired it.” With this, one understands that for years he had prepared himself to offer this disinterested holocaust: to be killed for the love of Our Lord, to allow himself to be consumed and spent like the perfume that Mary Magdalene spilt to honor Our Lord. There was no practical goal in those acts of homage. They were sacrifices made for no other reason than to please God: to expend precious things to manifest love for Him. Even if his sacrifice would not produce a good for souls and a humiliation for the enemies of the Church, Andrew wanted do die a martyr to prove how much he loved Our Lord. This is why he said he had “sweetly desired” to be crucified. The words express the splendor of the soul of a martyr. 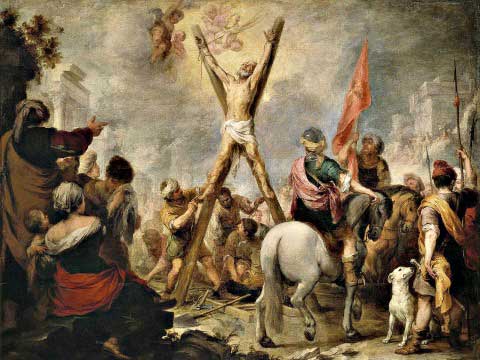 The Apostle continued by saying that he had “ardently awaited” the cross. Today men flee far from any kind of suffering, any kind of fight against their own passions, any kind of renunciation. For them to live is to enjoy a good life. Andrew, however, ardently awaited his own cross because he understood that what counts in life is not the pleasure he has, but the sacrifice he makes. This is what gives meaning to life. Therefore, the truly supernatural man is a friend of the cross, as St. Louis Marie de Montfort said so well.

Andrew not only accepted the crosses given him during his life, but he looked for them. This is clear when he said that he had “always sought” sacrifice. Then, in the hour of his martyrdom he had that marvelous reaction – he said that his “heart had long awaited” the crucifixion. Which one of us can say a thing like that? What a sublime courage Andrew had in saying these words, which, however, came to his lips naturally and with complete serenity because he had always lived in preparation for that.

Our Lord said that there is no greater friend than one who would give his life for the other. No one can give a greater proof of friendship with Our Lord than to desire the cross like this Apostle did.

He continued: “Take me, O Cross! Embrace me. Release me from my life among men. Bring me quickly and diligently to the Master. Through you He will receive me, He, Who through you has saved me.” Can any soul be more prepared for the beatific vision than one who would make this prayer at the hour of his death?

After his crucifixion, Andrew remained two days hanging on the cross before dying. While he was on the cross he was teaching the people who came to watch him die. How priceless that teaching was! What "cathedra" could ever be more sublime to teach people from? These were his last words:

“Lord, eternal King of glory, receive me hanging from the wood of this sweet cross. Thou who art my God, whom I have seen, do not permit them to loosen me from the cross. Do this for me, O Lord, for I know the virtue of Thy Holy Cross.”
Posted by America Needs Fatima at 9:25 AM