The description of hummingbirds posted below was given by the Brazilian Catholic leader, Prof. Plinio Correa de Oliveira, on this day exactly 29 years ago, in an informal conversation.

They are a true delight for the soul. 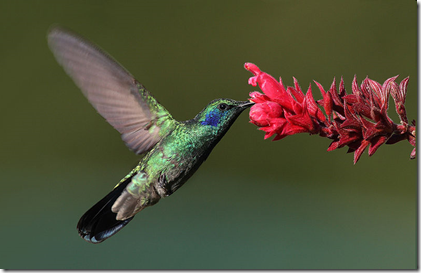 "Once, while on a farm, I saw a humming bird that suddenly stopped in mid-air and started to suck the nectar from some flowers.  It "kissed" the flowers, one by one.

"With flight like the trajectory of an arrow, displaying its pointed little beak, the hummingbird descended and stopped.  So rigid and straight in flight, so shaky when sucking nectar.

"It started off with a series of small movements, flying around the flower, eating its nectar.  In the way it flapped its wings, none of the vibrations were repeated.

"I perceived that the hummingbird had its rules -- rules that I did not know -- and I asked myself when it would stop fluttering about.

"Suddenly, in an unexpected manner, it left the flower.  In this complete breaking off, it seemed as if that flower had never existed for the hummingbird, and without any hesitation, it went to another.

"So Brazilian in its movements, the hummingbird does not share our national sentiment of nostalgia.  It abandons the flower without nostalgia, but also without bitterness.   One gets the impression that when it extracts the last drop of nectar, it is free and flies to another place like a rocket.

"Yet all its movements are carried out with ease, lightness, refinement, class, they seem a dance.  In fact, they are more than dance; they are flight.

"Each person can recall to mind, in slow motion, their impressions of when they saw a hummingbird fly by. 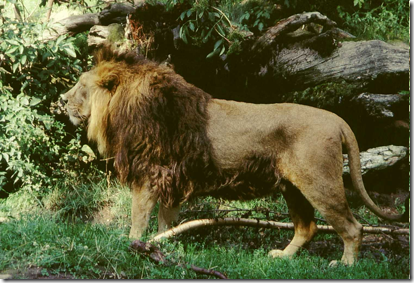 "We become enchanted to observe that in the universe of the animals there are two beautiful examples of movement: one is the lion that walks... 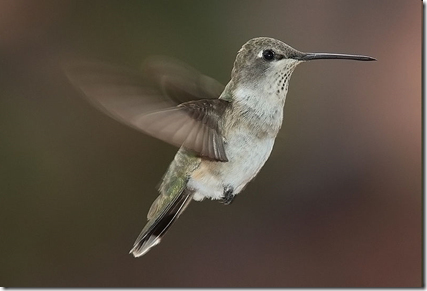 "...the other is the hummingbird that flies.  How different they are!   How many beings there are that God created to entertain us!

"The blue-green hummingbird is a precious jewel that God created for man to see, never to hold, and to feel the beauty of the fleeting thing that passes by.  In this valley of tears, it well represents the virtue of hope and our desire for Heaven.

"Divine Providence created in this land of exile several fleeting, excellent beings.  But they would cease to be excellent if they were always around, and so they afford us a glimpse of Heaven.

"Because this earth, being a place of exile, cannot offer this impression of Heaven on a stable and constant basis.  God had pity on us and sent us "fireflies" from Heaven to flicker with light, thereby giving us a foretaste of heavenly happiness."

Mdf, the copyright holder of this work, has published or hereby publishes it under the following license: Permission is granted to copy, distribute and/or modify this document under the terms of the GNU Free Documentation License, Version 1.2 or any later version published by the Free Software Foundation; with no Invariant Sections, no Front-Cover Texts, and no Back-Cover Texts. A copy of the license is included in the section entitled "GNU Free Documentation License".

This file is licensed under the Creative Commons Attribution ShareAlike 3.0 License. In short: you are free to share and make derivative works of the file under the conditions that you appropriately attribute it, and that you distribute it only under a license identical to this one.  Official license

Posted by Robert Ritchie at 6:02 PM