America Needs Fatima did a two hour Rally of Reparation against the blasphemous play “Testament” at the American Conservatory Theater on Sunday in the city of San Francisco. 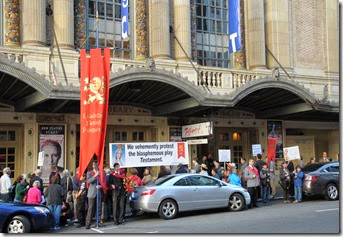 1. In a previous rendition of the play, the Virgin Mary was represented by an actress who goes totally naked in the show.

2. Holy Mary is portrayed as a skeptic who did not follow her own Son: She says: “I am not one of his followers.”

3. At the Crucifixion she fled, saying: “It was my own safety I thought of; it was to protect myself.”

4. She does not think her son is the Son of God.

5. She thinks the apostles are “a group of misfits.” Not one of them “normal.”

This is pure blasphemy.

What made us sad was to see how many elderly couples went to watch the show.  It was a shock.  One might think that the elderly were more religious than the youth.

The prayer rally was carried out under the guidance of veteran TFP-ANF leader, Mr. Philip Calder.

Some TFP-ANF volunteers, joined by many San Franciscans, prayed the Holy Rosary from the beginning of the show at 2PM until the theater audience left, hours later.

We chanted hymns and the bagpiper played music to inspire the Catholic prayer warriors on crowded Geary Street in San Francisco.

Thanks to everyone who made this public act of reparation such a success.  We pulled many thorns of sorrow from the Immaculate Heart of Mary on Sunday.

Posted by Robert Ritchie at 3:41 PM