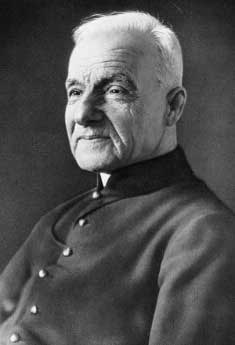 André Bessette was born in 1845 in the province of Quebec, Canada, the eighth of ten children. An orphan at twelve, he was taken in by an aunt and uncle. Set to various trades, he was unable to hold a job for very long because of his frail health. For thirteen years he worked at various occupations: shoemaker, baker, blacksmith, and once at a factory in the United States during the Civil War.

From an early age he exhibited signs of a deep spirituality with a marked devotion to Saint Joseph, the foster father of Jesus.

Though he had little education, at twenty-five he applied to the Congregation of the Holy Cross, an order of educators. After a year’s novitiate his frail health again came between him and permanent admittance, but at Bishop Bourget’s urging, he was received and assigned the humble post of porter at Notre Dame College, Montreal. Later, he would say, “When I joined this community, the superiors showed me the door, and I remained forty years.”

In his small room near the entrance he spent much of the nights on his knees. As he kindly received people, listened to their life’s woes and heard of their physical complaints, he began to lightly rub sick persons with oil from a lamp burning in the college chapel before a statue of St. Joseph. Word of healings began to spread. “I do not heal,” he said simply, “St. Joseph heals”. A gentle man, he became enraged when people ascribed healings to him.

As the influx of pilgrims to Brother André’s door grew, he was allowed to build a chapel on Mount Royal with money he raised. There he continued his ministry. His reputation grew and soon he was known as the “Miracle Worker of Mount Royal”.

In 1924 construction for St. Joseph’s Oratory began on the side of the mountain near Brother André’s chapel. This shrine, the largest church outside of Rome was funded by Brother André’s supporters around the world.

Brother André died in 1937 at the age of ninety-one. He was beatified in 1982 and canonized in 2010. Pope Benedict XVI said of St. André that he “lived the beatitude of the pure of heart.”
Posted by America Needs Fatima at 4:44 PM